Covid orphans are a tragic legacy of India’s pandemic 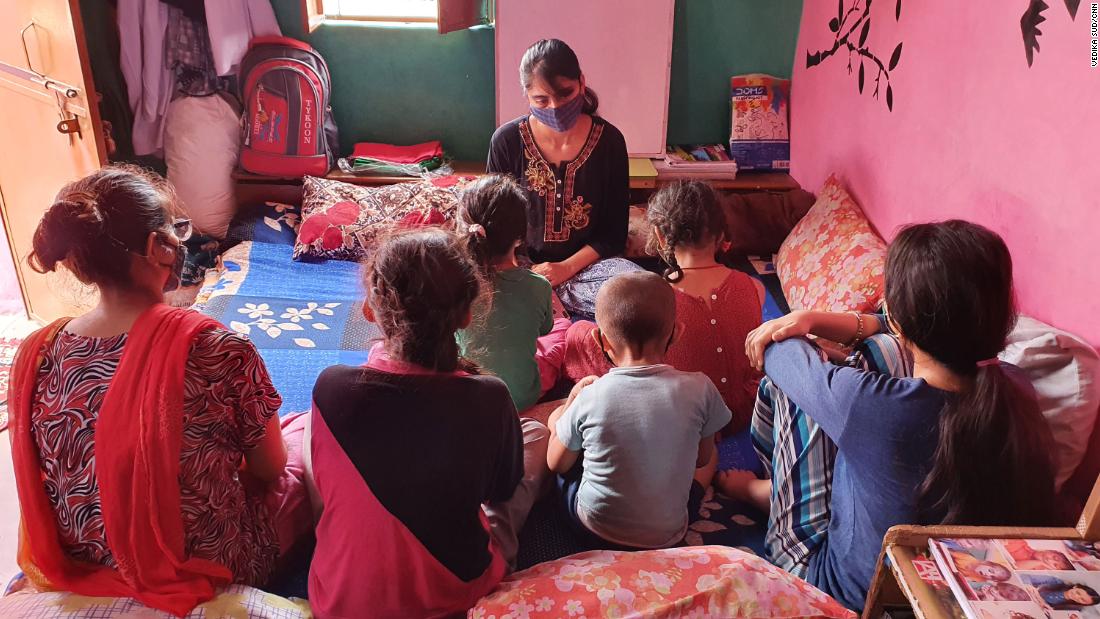 As they sit on the floor of their brightly painted Delhi home, she places another plate of food in front of a framed photo of her parents. They died just a few weeks ago from Covid-19.

The 23-year-old teacher has become the primary caregiver and breadwinner for five of her siblings, between 4 and 14 years old, and a major pillar of strength for her eldest 20-year-old sister. She’s barely had time to grieve.

“My biggest fear is whether I will be able to love them like Mom and Dad or not,” said Devika, who is only using her first name over privacy concerns.

They are among at least 577 Indian children who lost both parents to Covid between April 1 and May 25, when India was battling its second wave of the outbreak, according to government figures. But non-government organizations fear that many other orphans — potentially thousands — have been missed in the official count due to the difficulty in tracing children who have lost both parents.

Social workers are scrambling to track them down, worried they may be vulnerable to traffickers or end up on the streets if left to fend for themselves.

Just a few months ago, life looked very different for Devika and her family. Devika was focused on studying for a bachelor of education degree, and teaching children in her spare time.

Her father worked as a pandit — or Hindu priest — at a temple, and visited homes to perform rituals. He insisted on going out to work, even as cases soared in the capital. Her mother mostly stayed home, taking care of the children, and sometimes helped out at the temple, too.

At the end of April, when India was reporting more than 350,000 daily cases, leaving hospitals overburdened and oxygen in desperately short supply, Devika’s 38-year-old mother gave her some worrying news: she had a fever.

Devika tried to isolate the children upstairs, but it was too late. The whole family — including her 53-year-old father — developed a fever. Although the children were never screened for Covid-19, Devika’s mother later tested positive in hospital.

The children recovered, but their mother’s condition deteriorated and getting her proper medical care proved impossible. After visiting three hospitals in one night, Devika eventually found one in a nearby city that would take her mother, although it didn’t have oxygen or ventilators.

“We were so helpless. We did whatever we could possibly do. But we failed,” she said.

Around the same time, her father was admitted to a Delhi hospital. When her mother died on April 29, Devika didn’t have the courage to tell him. He had a phrase he would say a lot to his wife: “Without you, there’s no fun in living.”

“My father doted on Mummy. They’re together now.”Devika

Devika recalled the moment her mother’s body was taken to the Delhi hospital where her father was being treated, so he could see her one last time before she was cremated.

“Mom was in the ambulance, Dad came out of the hospital and then he saw. He lowered his eyes, and he didn’t say anything,” Devika said.

After that, she thinks her father lost the will to live. Just a week later, on May 7, he died of Covid, too.

“We really think he wanted to go with Mom,” Devika said.

“My father doted on Mummy. They’re together now,” she added, crying.

Devika sits in front of a shrine to her parents.
Credit: Vijay Bedi/CNN

After her parents died, Devika worried the authorities would remove her siblings from her. She called up a government-run child care hotline for advice.

They told her she was the primary guardian — and it was up to her to decide what to do.

The past few weeks have been a blur. Devika took out loans to pay for her parents’ hospital treatment, and now that money is helping to keep the family going. She juggles caring for her siblings with her university workload and her part-time job. The family also gets dry rations from non-government organizations, Prayaas and Childline. Devika hasn’t had time yet to process her own grief; she wants to be strong for her siblings.

“So much has happened that the tears don’t come,” she said.

What’s being done to help

Devika told the child hotline that she had lost both her parents — but that’s not always the case.

Organizations are searching for children who may need their help, and are relying on social media, hearsay and calls to Childline, a Ministry of Women and Child Development service which existed before Covid.

For rural children, accessing help can be hard. They have less internet access and fewer safety nets, says Save the Children India chief executive Sudarshan Suchi.

“The ones we don’t know of is what worries me more,” Suchi said.

They also have to contend with restrictions on movement, incorrect information, and fear of contracting Covid from neighbors who might have otherwise helped.

In one instance, Save the Children staff found out about two children whose father died in hospital and whose mother died at home, both from Covid. Both children were suspected of having Covid, so the neighbors in their slum avoided helping them and the children were unable to use the common bathroom spaces, Suchi said.

“If previously an earthquake or flood came into a small village or colony, everybody came together and found ways to rescue. When Covid comes, the first thought everybody has is keep away,” Suchi said. “It’s an unknown ghost. People with collective spirit and traditions of community action are partly wary today of these kinds of things.”

If things go smoothly, children can be connected with their extended family — the general principle is that institutional care cannot be the first resort, and that a family environment is better for the child, said Anurag Kundu, the chairperson for Delhi Commission for Protection of Child Rights.

But organizations worry about what happens if vulnerable children fall through the cracks, leaving them at risk of winding up on the streets or being trafficked.

In May, Union Cabinet Minister for Women and Child Development Smriti Z Irani urged people who hear about orphaned children to tell the authorities — and not to share information about them online, lest they are targeted by traffickers.

“We all must ensure legal adoption, otherwise children can be trafficked in the name of adoption,” she tweeted.
There’s little data on the numbers of children being trafficked due to the pandemic, but there are already signs of more homeless children. That could be because their parents have died from Covid, or because their parents can no longer care for them as they’ve lost their job.

“Before the pandemic, under normal circumstances, there were more than 2 million children in distress as such on any day on the streets,” Suchi said in May. “If anything in the pandemic it could only go worse, not better.”

Even before the second wave, more children were living on the streets, Kundu said — mostly likely victims of India’s months-long lockdown that left the country’s millions of daily wage earners without work.

“I have never seen so many children on the streets in my whole life as many as I’ve seen in the last 12 months,” Kundu said. “The socioeconomic aspect of it will be felt in the times to come.”

For now, the focus is on keeping children safe. But India’s Covid orphans demonstrate how the devastation of the past year will likely be felt long after the pandemic is over.

India’s government has rolled out financial support for children orphaned by Covid, offering them free education and a $13,732 personal fund to be given as a monthly stipend for five years once they turn 18.

“If previously an earthquake or flood came into a small village or colony, everybody came together and found ways to rescue. When Covid comes, the first thought everybody has is keep away.”Sudarshan Suchi

“Children represent the future of the country and the country will do everything possible to support and protect the children so that they develop as strong citizens and have a bright future,” said a statement from Prime Minister Narendra Modi in May when those measures were announced.

“These children, being already vulnerable, are going to get into a spiral in this. It’s not just a question of their sickness from Covid — it’s about their education, it’s about their health, it’s about their basic social security fabric has come apart suddenly,” Suchi said. After that, there needed to be support for their future.

“You can’t rescue a child from midstream and then let them drown towards the end of the stream or somewhere towards the bank.”

Devika, who is now the guardian of five of her siblings, brushes her younger sister’s hair. Credit: Vijay Bedi/CNN

“The child is deprived of the loving care of their parents, of growing up in a family environment,” she said. “The psychosocial impact on a child can be long lasting, can be lifelong.”

“The psychosocial impact on a child can be long lasting, can be lifelong.”Yasmin Haque

The future of her siblings weighs heavily on Devika.

She hasn’t told her youngest siblings that their parents are dead — for now, they’ve been told their parents have gone back to their village in the countryside.

When her parents were alive, Devika questioned why they went out as the pandemic raged — the day her mum developed a fever, Devika had asked her not to go to help at the temple. Devika told them it was more important to be alive and safe than to earn.

“I never understood why,” she said. “Now that I am where they were, I finally understand them. I get why they left the house.”

The 17 Best Weekend Deals on Headphones, Webcams, and More

Austin: US doesn’t want conflict with China but won’t ‘flinch when…