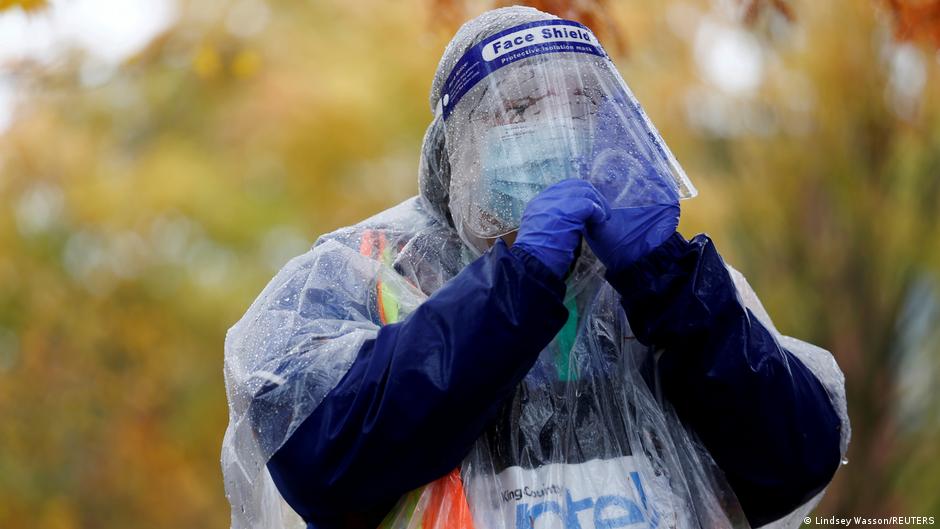 The United States has registered a one-day record for new coronavirus cases with over 100,000 new infections, according to tallies from the Washington Post and news agency Reuters.

Nine states reported record one-day caseloads: Colorado, Idaho, Indiana, Maine, Michigan, Minnesota, Rhode Island, Washington and Wisconsin, in a period dominated by a presidential election that included a record number of voters mailing in their ballots. Many did so to avoid congested polling stations in order to stem the spread of the virus.

In addition to rising infections, hospitalizations topped 50,000 for the first time in three months.

The UK‘s Prime Minister Boris Johnson said Wednesday that his government could be ready to deliver a COVID-19 a vaccine in the first part of 2021.

Britain’s National Health Service is looking at two vaccines: one produced by German firm BioNtech and US pharmaceutical company Pfizer, and another from the University of Oxford and AstraZeneca.

Any vaccine will need the approval of British regulators before it can be given to the public.

Both vaccines are currently being tested out in clinical trials;the results are due before the end of this year.

Hungary‘s foreign minister Peter Szijjarto has tested positive for the coronavirus during an official visit in Thailand, the Hungarian government said on Wednesday.

Szijjarto in the only person from his 12-member delegation have been found to be infected.

He will return on a separate plane back to Hungary later Wednesday.

Germany‘s Robert Koch Institute said there had been 17,214 new COVID-19 cases reported in the past 24 hours.

The Berlin-based organisation, which is responsible for disease prevention and control, said the number of registered deaths rose by 151 over the same period to a total of 10,812.

Belgium, proportionally still the worst-hit nation in Europe when it comes to coronavirus cases, said Wednesday there are increasing signs that a turning point in the crisis was drawing close.

“The high-speed train is slowing down,” said virologist Steven Van Gucht of the Sciensano government health group. “The infection center is stabilizing and hospital admissions are increasing at a slower pace.”

Belgium has the highest proportional incidence of coronavirus cases in the European Union with 1,753 per 100,000 people, while countries like Spain, Britain and Italy have less than a third of that concentration.

In Italy, the government moved to tighten up a late-night curfew. The measures will forces Italians to stay indoors between 10 p.m. and 5 a.m.

Several other European governments, such as France and Belgium have brought in similar measures aimed at slowing the spread of the virus.

Austria released new data on Wednesday that showed that new daily coronavirus infections have climbed above 6,000 for the first time.

As many as 6,211 were registered to have been infected with COVID-19, according to the country’s heath and interior ministries.

Switzerland too said it has seen an uptick in coronavirus cases, with 10,074 new infections and 73 more deaths.

The World Health Organization says there has been a “further acceleration” in the speed of COVID-19’s spread in Europe, which was responsible for about half of the globe’s new cases reported last week.

The UN health agency said in a weekly report published late Tuesday that European countries also recorded a 46% increase in deaths compared with the previous week. Although deaths also rose in the Americas, the rate of increase there was only 2%.

Australia has signed two deals to buy 40 million vaccine doses from Novavax and 10 million from Pfizer and BioNTech, as the the state of Victoria registered zero coronavirus cases for the sixth day in a row.

Similar deals occurred in September worth A$1.7 billion ($1.22 billion, €1.04 billion) with AstraZeneca and CSL Ltd for nearly 85 million doses.

Australian Federal Health Minister Greg Hunt said the government was on track to begin rolling out the vaccines in the country from March 2021.