‘Compromised position’: Dr. Anthony Fauci on why he thinks he hasn’t heard from Joe Biden’s team 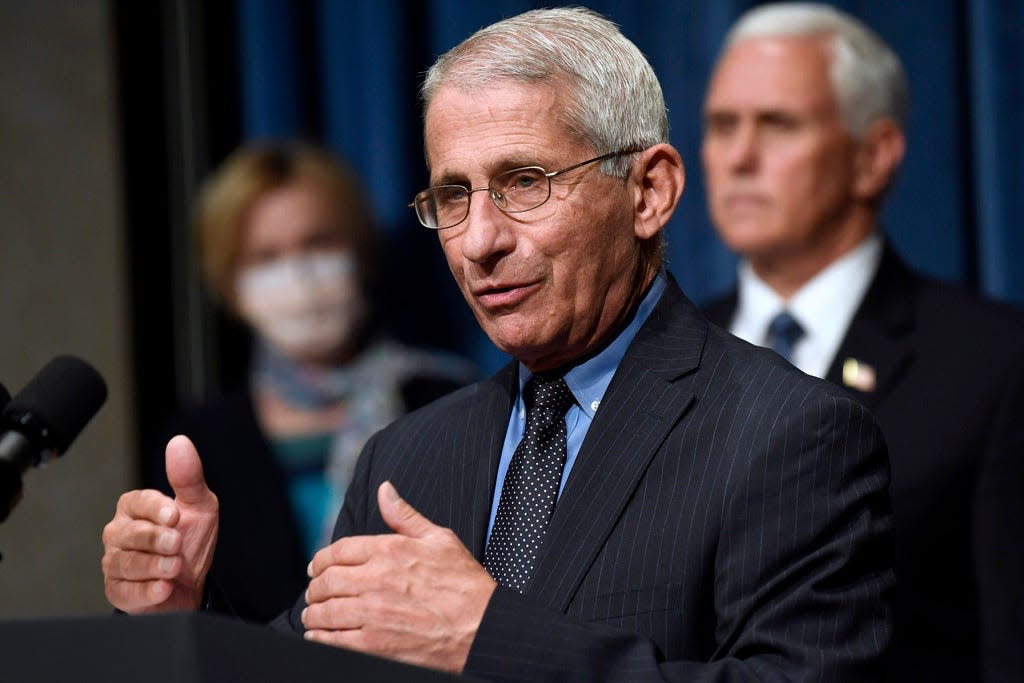 WASHINGTON — Dr. Anthony Fauci said Wednesday he wants to begin talks with President-elect Joe Biden to ensure a smooth transition for the new administration but believes the Biden team is wary of putting him in a “compromised position” as President Donald Trump refuses to concede the election.

Fauci, the nation’s top infectious disease expert, hasn’t spoken to Biden as the U.S. battles a significant spike in the coronavirus pandemic and the president-elect looks to start working on his plan to combat the virus.

“I have not been formally told that anything is forbidden,” Fauci told USA TODAY’s Editorial Board, referring to the lack of communications from the Biden team including Ron Klain, Biden’s newly named chief of staff. “But it’s quite obvious that this is a very sensitive period. I don’t want to get into that. I have tried to the best of my ability to stay out of the political aspects and just focus on my role as a public health person, a physician and a scientist.”

Fauci, director of the National Institute of Allergy and Infectious Diseases, added: “To be honest with you, I believe that the Biden people including Ron Klain understand that and don’t want to put me in a compromised position.”

Biden, who has told the public to prepare for a “dark winter” as COVID-19 spreads, warned this week, “More people may die if we don’t coordinate.”

Fauci, who has served under six presidential administrations, has been a part of five transitions. But he’s drawn regular criticism from supporters of Trump and increasingly the president himself, who slammed Fauci as a “disaster” two weeks before the election.

“I can tell you, transitions are really important, and they’re important because you don’t want to miss a step,” Fauci said.

After the 2016 election, Fauci said, President Barack Obama’s outgoing chief of staff Denis McDonough organized a meeting with Trump’s incoming chief of staff Reince Priebus to begin discussions before Trump’s inauguration on how to respond to potential outbreaks.

“That kind of thing makes it easier to just go from one to the other,” Fauci said. “So yes, I wish we would be able to do that. That would be helpful.”

TJ Ducklo, a spokesman for the Biden transition team, declined to comment on Fauci’s remarks.

Biden and his incoming team of advisors are seeking a sign-off form the General Services administrator, Trump-appointee Emily Murphy, who must ascertain the election results before the current administration can start working with the Biden team.

Because she hasn’t, millions of dollars in federal funding and use of resources for the new administration are on hold. The GSA’s decision has also blocked the new administration from using federal office space and gaining access to government agencies that they’ll soon take over. Biden also has not received a daily classified briefing on national security threats that is given to incoming presidents.

Biden’s team has worked to move forward anyway. That includes assembling a 13-member coronavirus task force co-chaired by David Kessler, professor of pediatrics and epidemiology and biostatistics at the University of California and a former U.S. Food and Drug Administration commissioner from 1990 to 1997; Vivek Murthy, former U.S. surgeon general under Obama; and Marcella Nunez-Smith, associate professor of internal medicine, public health and management at Yale University.

Murthy pushed for “cooperation and communication” from the Trump administration during a briefing with media Tuesday.

Information sought by Biden’s team, NBC News reported, includes: the total number of N95 masks, plastic gloves and syringes available nationwide; the availability of nurses to administer millions of doses of vaccines next year; terms of vaccine contracts with pharmaceutical companies; and access to existing databases on testing, vaccinations and protective gear.

Biden has urged all Americans to wear face masks amid rising positive COVID-19 cases and said he would work with governors and local governments to enforce masks mandates.

Biden campaigned on following the advice of doctors to combat the coronavirus pandemic and listening to Fauci, in particular. Trump has often disregarded Fauci’s recommendations aimed at curbing the spread of the virus.

Fauci expressed optimism about two vaccines that have shown promising test results. He said he believes the distribution of doses of the vaccines could begin by the end of December or January. But he said “COVID fatigue” and “denial” is a real issue in many states.

“If we can hang on and implement the public health measures, help is really on the way,” Fauci said.

More: There are now two promising potential COVID vaccines. This is what we know about them.

This article originally appeared on USA TODAY: Anthony Fauci on why he thinks he hasn’t heard from Joe Biden’s team

Protests after the arrest of Bobi Wine, Ugandan presidential candidate