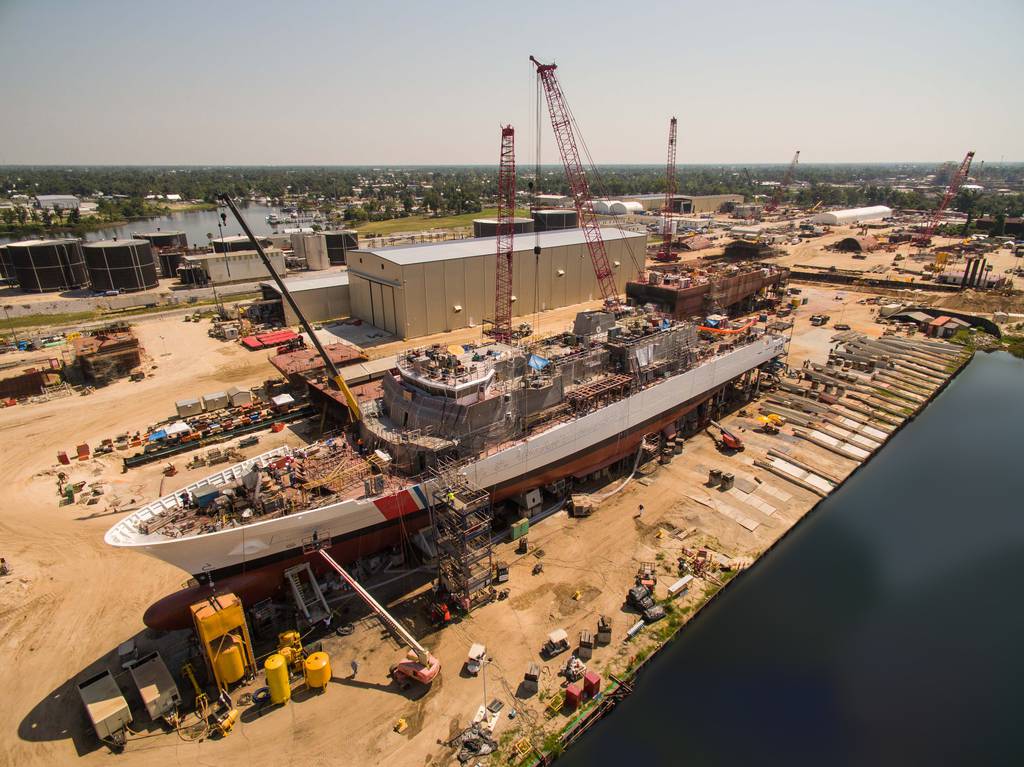 WASHINGTON — The U.S. Coast Guard selected Austal USA to take over its Offshore Patrol Cutter program, opting not to stick with Eastern Shipbuilding Group, which is building the program’s first four ships.

Austal on Thursday won a $208.3 million contract for its first OPC, with the potential to build as many as 11 ships for up to $3.33 billion.

The deal gives a significant boost to the Alabama shipyard, which invested heavily in transitioning half of its aluminum shipbuilding line to a steel production line but has struggled to secure work to keep that production line busy.

In 2016, the Coast Guard selected Eastern to build the OPC program, set to include as many as 25 ships. The company’s Panama City yard was decimated by Hurricane Michael in 2018, and the Coast Guard decided in 2019 it would recompete the program to ensure OPC remained on schedule and budget.

Though Eastern leveraged significant funding from the state of Florida and a non-profit to rebuild the yard and compete for what the Coast Guard is calling OPC Stage 2, Thursday’s decision makes clear the Coast Guard instead will bring the work to Mobile.

“We are extremely disappointed in this decision and are evaluating our options,” Joey D’Isernia, the president of Eastern Shipbuilding Group, said in a statement.

The Coast Guard did not elaborate on why it selected Austal, but noted in a statement its “requirements for OPC Stage 2 detail design and production were developed to maintain commonality with earlier OPCs in critical areas such as the hull and propulsion systems, but provide flexibility to propose and implement new design elements that benefit lifecycle cost, production and operational efficiency and performance.”

“When I visited Eastern Shipbuilding last year, I saw firsthand their commitment to building reliable, state-of-the-art ships,” he added. “They have proven they can do the job and do it well. This decision will cost taxpayers more money and slow down the delivery of these critical vessels.”

For Austal, OPC was something of a must-win program.

When the company converted half the yard to build steel ships, it eyed a buffet of potential programs to win: the U.S. Navy’s light amphibious warship, next-generation logistics ship, T-AGOS ocean surveillance ship and guided-missile frigate, as well as the Coast Guard’s OPC.

At least two of those programs have since been delayed, leaving Austal with fewer options to keep the yard viable as the Independence-variant Littoral Combat Ship, one of its two existing aluminum programs, winds down.

The company more recently won a contract to build a one-off Auxiliary Floating Drydock Medium for the Navy, but this contract to build 11 ships — and potentially the remaining 10 — provides longer-term stability.

Mississippi-based HII Ingalls Shipbuilding also competed for the OPC contract, which could have kept one of its production lines hot as another Coast Guard program, the National Security Cutter, nears its end.

“Although we are very disappointed in the Offshore Patrol Cutter stage 2 decision, we remain committed to serving the Coast Guard on the National Security Cutters we are currently building, and look forward to opportunities to support this valued customer in the future,” HII spokesman Danny Hernandez said in a statement.