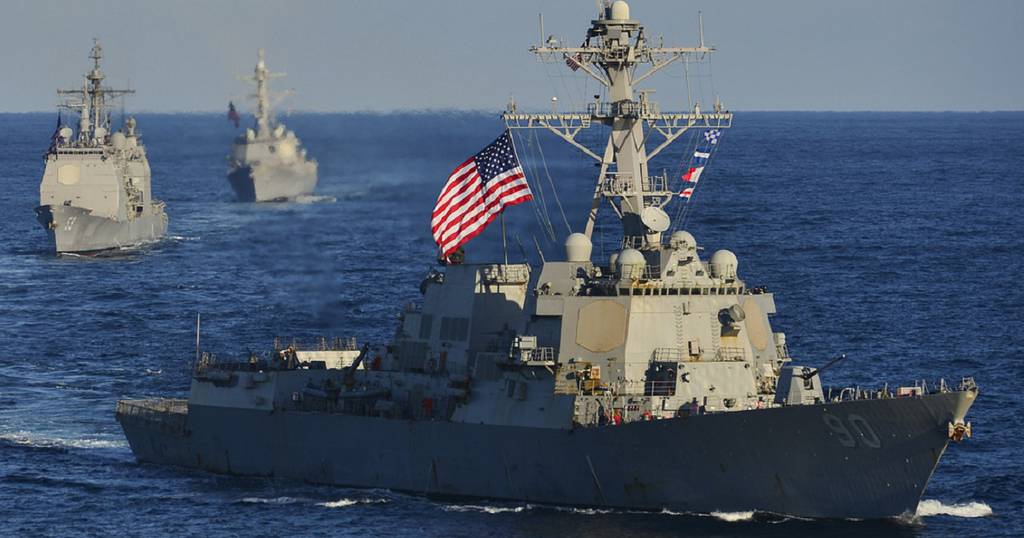 MELBOURNE, Australia – A joint Chinese-Russian naval armada has sailed around Japan following a joint exercise in the Sea of Japan, sailing through a narrow international waterway between two of Japan’s main islands.

The 10-ship naval task force, split evenly between Chinese and Russian vessels, sailed through the Tsugaru Strait, which runs between the Japanese islands of Hokkaido and Honshu, during their transit from the Sea of Japan into the western Pacific on Oct.18.

The Tsugaru Strait is an international waterway that is only 12 miles at its narrowest point. Japan has claimed territorial waters in the straits that extend to three nautical miles (5.6 km) from its coasts, significantly less than the maximum of 12 nautical miles (22.2 km) allowed under international law.

This meant the Chinese-Russian task force was sailing in international waters throughout its passage, which then saw the ships turn south along the Japanese coast before going west between Sumisu Island and Torishima in Japan’s Ogasawara islands in the early hours of Oct. 21.

The exact identity of this last ship is uncertain as the PLAN is in the process of re-numbering its replenishment and intelligence gathering fleet, but it is believed to be the Dongpinghu, which previously carried the hull number 960.

The Japan Maritime Self-Defense Force, or JMSDF, kept a close watch on the task group as it sailed close to Japan’s waters, with the minesweepers Aoshima and Izushima in attendance as the Russian and Chinese ships transited the Tsugaru Strait. The Japanese also deployed a P-3C Orion maritime patrol aircraft from its Fleet Air Wing 2 at Hachinohe to monitor the task force.

As the task group made its way down Japan’s east coast, the JMSDF continued to monitor its progress, with the destroyers Yamagiri and Takanami taking turns to keep watch while overhead Japan Air Self Defense Force interceptors were scrambled in response to Kamov Ka-27 and Ka-28 helicopters flying off the Russian and Chinese ships.

The ships were some of those from both navies which took part in the Sea Interaction 2021 exercise that took place Oct. 14-17. A Russian defense ministry news release said a rescue ship and diesel-electric attack submarine from the PLAN was also involved, while the Russian contingent included the submarine Ust-Bolsheretsk, two minesweepers, a missile boat and a rescue tug.

Russian Sukhoi Su-30SM Flanker multirole fighters and unspecified anti-submarine aircraft were also involved in the exercise, which included naval gunfire live firing and anti-submarine warfare training. Russia also claimed to have chased an American destroyer out of exercise waters, although the U.S. Navy said the USS Chafee was in international waters before the area was closed for the exercise.

Korea Aerospace Industries, or KAI, showcased this week a concept model of an electrically powered basic trainer aircraft during the Seoul International Aerospace and Defense Exhibition 2021 at an airbase in Seongnam, just south of Seoul.