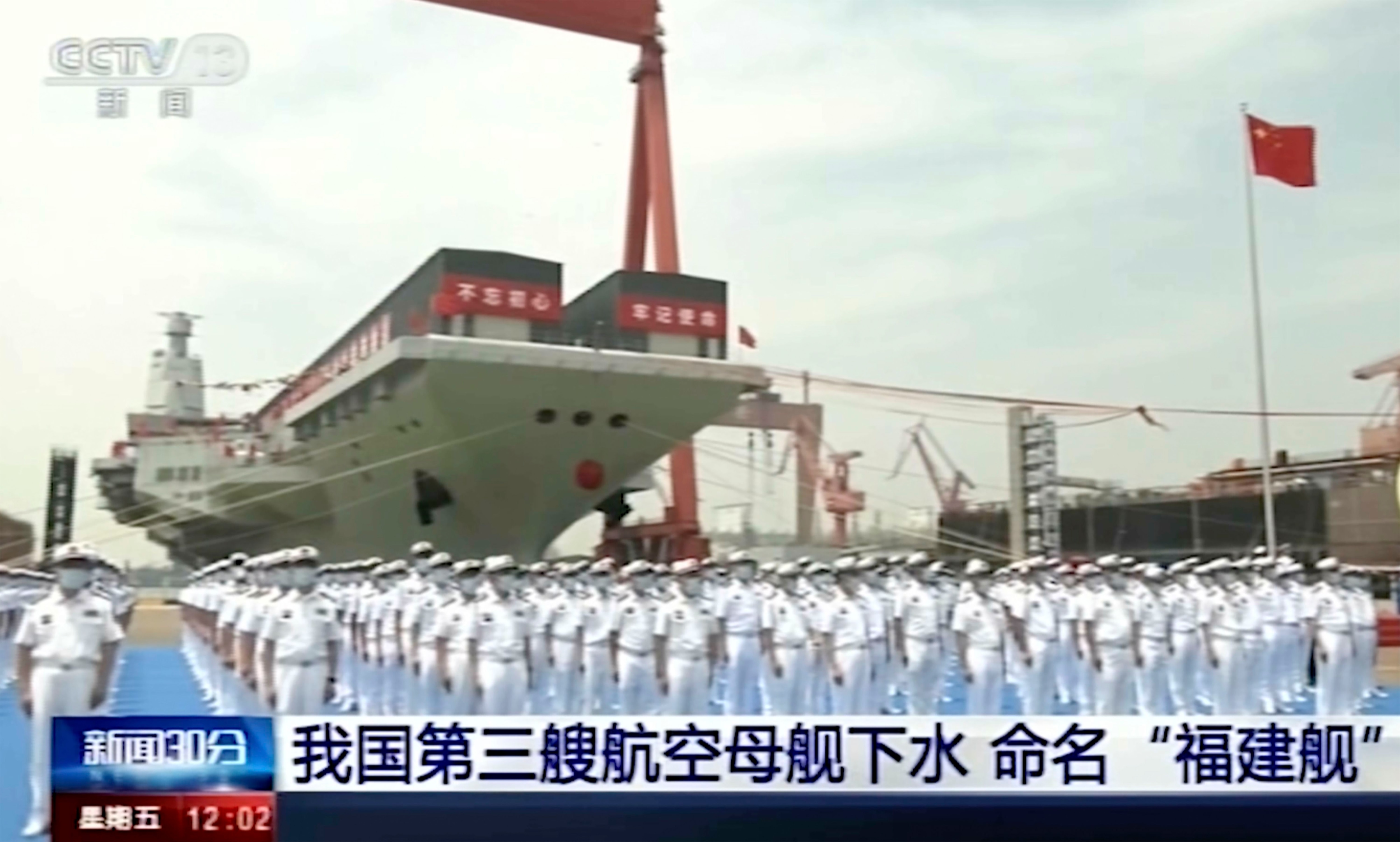 MELBOURNE, Australia — China has launched its third and largest aircraft carrier to date at a shipyard in Shanghai, the first of its type there to feature a catapult aircraft launch system.

The ship, which was indigenously designed and built, was christened as the Fujian, named after the Chinese province opposite Taiwan, according to state-run news agency Xinhua. It was launched Friday at the Shanghai shipyard where it had undergone construction since 2018.

A satellite photo, taken June 15 of the dry dock at Shanghai’s Changxing Island and provided to Defense News by Planet Labs, showed the narrow basin had already been flooded, indicating the launch was imminent.

The Fujian, which was previously known as the Type 003, has a flight deck that measures about 316 meters (1037 feet) long and is expected to have a displacement of about 100,000 tons when complete. The dimensions are roughly the same as the U.S. Navy’s Kitty Hawk-class carriers, although the new ship is longer that China’s two preceding carriers, the Liaoning and the Shandong.

The installation of three catapults on its flight deck would allow the new ship to launch heavier aircraft such as the Xian KJ-600 turboprop airborne early warning aircraft, which is currently undergoing flight tests.

The KJ-600 is a twin-engine aircraft somewhat analogous to the U.S. Navy’s E-2 Hawkeye, and it features a distinctive disc on top of its fuselage housing a powerful radar.

The People’s Liberation Army Navy has so far used the Shenyang J-15 Flying Shark as its main carrier-borne fighter. This is a Chinese version of the Russian-origin Sukhoi Su-33 Flanker, which China developed as its mainstay combat aircraft for its carriers.

China is also developing a twin-seat electronic attack version of the J-15, meaning the type will likely continue serving on its carriers for the foreseeable future. The introduction of force-multiplier platforms like this and the KJ-600 would dramatically improve the PLAN’s carrier air wing capabilities.

There are also signs China is about to deploy a version of the Shenyang FC-31 stealth fighter as its next-generation carrier-borne fighter, with several heavily modified airframes of what were previously a privately developed design for the export market currently undergoing flight testing in China.

The PLAN has operated a refurbished ex-Soviet Kuznetsov-class vessel since it entered service in 2012, as well as an indigenous, modified Kuznetsov design commissioned in 2017. Both are about 305 meters long and displace about 65,000-70,000 tons.

Both ships, which are named the Liaoning and Shandong, respectively, lack catapults. However, they are equipped with a ski ramp to launch fixed-wing aircraft, which has so far only included the J-15.

It’s unknown which of the PLAN’s three fleet commands will operate the Fujian. The Liaoning is assigned to the service’s North Sea Fleet, while the newer Shandong is with the South Sea Fleet.

Ukraine, EU make deal for defense cooperation projects — if and when the war ends