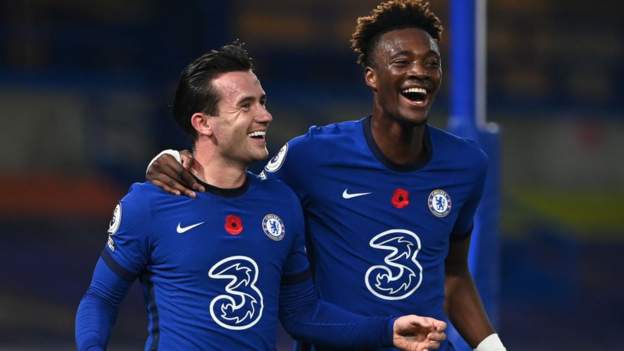 Chelsea came from behind to beat Sheffield United comfortably at Stamford Bridge, leaving the visitors bottom of the Premier League on another frustrating evening for Chris Wilder’s side.

David McGoldrick gave the Blades the lead in the ninth minute with a deft flick from close range.

But Tammy Abraham’s scuffed half-volley bounced past Aaron Ramsdale for Chelsea’s equaliser, before Ben Chilwell touched in Hakim Ziyech’s cross at the back post.

Ziyech turned provider again after the break when Thiago Silva headed in his free-kick at the near post, before Timo Werner added a fourth.

The result leaves Sheffield United with one point from their opening eight matches, while Chelsea move up to third, a point behind leaders Southampton.

Three of Chelsea’s new signings were on the scoresheet but it was another summer recruit who stole the show in west London on Saturday.

Ziyech, who picked up two assists, showed his quality with countless deliveries into the box from set-pieces and a range of exquisite passing.

He was involved in the build-up to the opening goal and his deep cross caused Ramsdale problems minutes later and the ball was parried into the path of Werner, who slid in to smash it on to the crossbar.

Another ball in from Ziyech – almost identical to the previous one – bounced in off Chilwell after Ramsdale failed to deal with it to make it 2-1, and the Moroccan’s free-kick was then nodded in by Silva.

The midfielder could have set up a few more too. His sublime ball through to Werner was chipped inches wide by the former RB Leipzig man, who gave a big thumbs up to Ziyech in return.

Manager Frank Lampard was full of praise for Ziyech afterwards, describing the 27-year-old’s performance as “amazing”.

“He was probably at his best today,” Lampard told BBC Sport. “He has a good confidence and arrogance about him – a good arrogance. He will keep trying those passes and keep trying to get those assists.”

Sheffield United started the day propping up the Premier League table following Burnley’s draw at Brighton on Friday and they will not have a chance to move off the bottom for another 15 days.

It has been a disappointing start for the Blades and any hopes of turning things around at Stamford Bridge seemed to evaporate before half-time.

McGoldrick’s delightful flick gave them a surprising lead – it was the first goal Chelsea had conceded in 459 minutes – but it prompted the visitors to drop deeper off the ball rather than play on the front foot.

The Blues took advantage, exploiting their opponents’ vulnerability and testing goalkeeper Ramsdale with constant deliveries into the box.

Ramsdale himself had a few nervous moments – the hesitation for Chilwell’s goal, the parry which was almost rebounded in by Werner and a fumble from Ziyech’s cross in the second half.

Sheffield United, who were able to keep the scoreline down against Manchester City on 31 October, could not do the same at Stamford Bridge and they provided very little threat going forward.

The international break potentially comes at a good time for the Blades, after defeats by Liverpool and Arsenal, as well as City and Chelsea, in the past month.

It will be a crucial period when they return too, as they take on 15th-placed West Ham United and West Bromwich Albion, who are third from bottom before they host Tottenham on Sunday.

‘The balance of the team felt great’ – what they said

Chelsea manager Lampard to BBC Sport: “It was enjoyable. This is a team that is so difficult to play against. They are a great team with an incredible coach. The reaction was brilliant to the goal – we created a lot and were really secure. I’m happy with everybody.

“The balance of the team felt great. There were so many good things in what we were creating, we scored two goals from set-pieces.

“I don’t want to get too carried away but I’m happy.”

Sheffield United boss Wilder to BBC Sport: “At times my teams are naive. It’s irrelevant. We have given away some poor goals. I think we have to look at ourselves.

“If you give handouts to world-class players they will take their opportunities – which they did. It’s no good opening up then as it could be any score.”

The best of the stats

Sheffield United host West Ham in the Premier League on Sunday, 22 November (14:00 GMT), while Chelsea travel to Newcastle the day before (12:30).