Cheers Erupt on N.Y.C. Streets After Biden’s Victory Is Declared 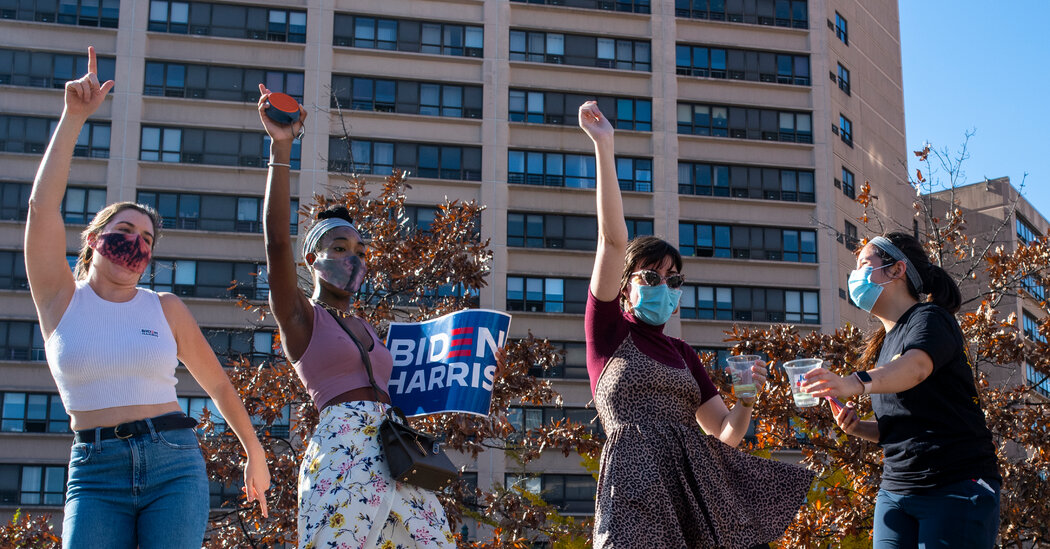 It started with a low rumble that sounded like faraway crowd noise coming from a football stadium. Then came the loud honking of car horns. Some people dashed out of their apartments and began dancing in the streets, joined by others who banged on pots and pans. One man popped open a bottle of champagne in the middle of a Brooklyn block.

The response recalled the cheers for essential workers that had broken out in the first months of the pandemic at 7 p.m. every night in the city. But the celebration lasted for hours, as people poured into the city’s parks and squares on a warm and clear fall day that only seemed to add fuel to the festive mood of New Yorkers who had supported Mr. Biden.

Nearby, a runner screamed, “Oh my God, oh my God, I don’t believe it!,” stopping dead in her tracks as she saw the news come across her phone.

“Believe it, believe it!” a cyclist yelled, ringing his bike bell as hundreds of people in the park burst out clapping and hollering.

Kevin La Moureaux, 26, a medical student at the Brooklyn Hospital Center, was propping himself up on a light pole on Flatbush Avenue in Prospect Heights, Brooklyn, as he shouted “Let’s go!” to the drivers honking their horns.

“I’m a registered Republican; this is the first time I’ve ever voted for a Democrat and it feels so good,” Mr. La Moureaux said. “I just want normalcy. I just want civility.”

Thousands of people poured into Times Square, where waves of cheering crashed through the crowd again and again on an unexpectedly sunny and warm day.

Cristina Diaz, 18, a freshman at Manhattan College in the Bronx who moved to New York from Georgia this year, stood on the sidewalk beaming through her coronavirus face mask. She said she had heard the news of Mr. Biden’s victory as she and her friend Maddie Siefert, who stood beside her, left the dining hall on campus.

She and Ms. Siefert, an 18-year-old freshman from Connecticut, rushed to Times Square to join in the celebration after they saw images of it on social media. Ms. Diaz said the role her home state played in denying President Trump a second term filled her with pride.

“Georgia had been red for so long and now it is like a dream come true,” Ms. Diaz said. “It is fun to finally not see Georgia in a bad light for once.”

Mr. Trump is a native New Yorker who rose to success in the city’s real estate industry, but is very unpopular in most, but not all, of the city.

In Columbus Circle, thousands of people gathered and spilled onto the street, singing, dancing and waving flags at the foot of the Trump International Hotel. The gathering was planned as a protest march, to demand a full count of every legal ballot, but quickly became a party.

Sound systems blared “We Are the Champions,” by Queen, or “Bye Bye Bye” by ’N Sync. Some drivers stopped their cars and stepped out of them to dance and take pictures.

In many of the city’s liberal neighborhoods, including the Upper West Side of Manhattan, Greenwich Village and the brownstone neighborhoods of Brooklyn, the partying in the streets seemed likely to continue all afternoon.

A big crowd danced in front of Barclays Center in Downtown Brooklyn, where Senator Chuck Schumer, who lives in Park Slope, joined them. An aide said Mr. Schumer held up his phone during a conversation with Mr. Biden and Speaker Nancy Pelosi so that they could hear the cheers.

A crowd assembled near Trump Tower to cheer his defeat. One man walked along the street with a cardboard sign that read, “You’re fired.” Another man waved an American flag.

Bassema Yousef, 37, a management consultant, waved a “We Are The People” poster that depicted a woman in a hijab. Ms. Yousef said she bought the poster in 2017 after Mr. Trump banned travelers from seven predominantly Muslim nations, and kept it in anticipation of the day the president leaves office.

Ms. Yousef said she had relatives and friends affected by the Muslim ban, including her brother.

“As a woman of color, as a Muslim American, I’m tired of feeling like the foreign ‘other’,” she said. “Joe Biden is going to help us heal.”

The mood was more subdued at a construction site near Hudson Yards in Manhattan. Construction workers stared at their phones with a hint of disappointment. Others walked away shaking their heads in disbelief.

“I had co-workers calling me who voted for Trump going crazy,” said John Rodin, 25. “Every Trump person I know said it was rigged, every single one. My job site was very disappointed for him to win. Everybody wanted Trump.”

Over in Sheepshead Bay in Brooklyn, Louis DeMarco, 71, and Andy Feinstein, 60, were struggling to accept that Mr. Biden managed to become the first candidate to beat an incumbent in more than a quarter century.

“I’m not happy about the outcome, I voted for Trump,” said Mr. Feinstein, a retired electrician, who strolled near the beach shirtless. “I feel Trump is very obnoxious and turns people off with what he says, but he’s the better man for the job.”

“Life goes on,” said Mr. Feinstein with a hint of resignation. “He’s not the first candidate I voted for who didn’t get picked.”

But in Inwood, at the northernmost tip of Manhattan, celebrations started almost instantly.

Windows above the streets were lifted open as residents cheered, banged pots and pans, and expressed relief and happiness. Cars stretching down Broadway honked and drivers lifted raised fists out their windows. Some passengers banged the side of car doors.

True to neighborhood fashion, dirt bikes and motorcycles revved their engines through intersections and the same bells, pans and whistles that were used during the 7 p.m. cheer for essential worker were now brought to the streets.

Robert and Maya Kite heard the cheers from their window, checked their phones and immediately began to celebrate.

They put their two daughters, ages 3 and 6, in sundresses, grabbed a tiny pot, a tiny strainer and two wooden spoons to bang them, and headed to the intersection of Broadway and Dyckman, where hundreds had gathered.

“We heard the sound, the screaming and we immediately assumed what the news was,” said Ms. Kite, 33. “We opened all our windows and started cheering. Then a friend told us there were people here gathering. I feel elated and that there’s hope in a way that there wasn’t before.”

Mr. Kite added: “Having lived in these neighborhoods in New York through the crisis, we’d always hear the sirens going off during Covid. It was visceral to all of us. And to know that a president is going to take that seriously now, means a lot to us. I mean, how many people died in these very neighborhoods?”

At the sounds of the same bells and pans that had cheered on the working class during the harshest of the city’s crisis, the couple was comforted that the same energy was still bringing New Yorkers together.

“This sound is exactly the same,” Ms. Kite said.

Throughout Williamsburg, Brooklyn, residents ran to their front porches and balconies to ring bells and bash pots and pans. The sounds of car horns honked and whoops and shouts of “we did it” filled the air. Someone blasted the song “Y.M.C.A.”

Carrie Salter, 62, an architectural designer, danced on South 3rd Street as she gazed around at people celebrating.

“This is what it was like when the Mets won in the ’80s,” she said. “I’m very happy to be a part of this; I feel embraced by everybody right now in the community.”

Asked how she felt, she said, “Oh my God, all the stress has been released from my body, I just feel calm again. My brain is opening again.”

In Manhattan, Stella Voight, 68, who was with a group awaiting to hike in Inwood Hill Park, said: “I started crying when I heard this news. I feel emotional. I’m a teacher in the city, and I thought of the children.”

For others, the news seemed to release the tension built up during the pandemic and a contentious election season.

Eileene Vicencio, 29, said seeing Senator Kamala Harris, ﻿the daughter of a Jamaican father and an Indian mother, ascend to such a high office was “moving” and felt “unreal.”

“There’s been a lot of talk about the Latino vote and where it went and where it didn’t go,” she said. “This is just a realization that we have this power. The fact that she’ll be in the White House is giant. It’s so much bigger than her.”

Still, beneath the celebration on New York’s streets ran a current of worry: The vote was so close in so many battleground states, and many of Mr. Biden’s supporters recognized that the political battle with people who agree with Mr. Trump on major issues was far from over.

For Lauren Whitehead, 33, who is Black, the race demonstrated to her “how divided the country is,” something she said she found “heartbreaking.”

“It’s a reality we already knew but it’s now even clearer,” she said. “But to see that we’ve hit another milestone despite all that with a woman of color in office. It’s incredible.”