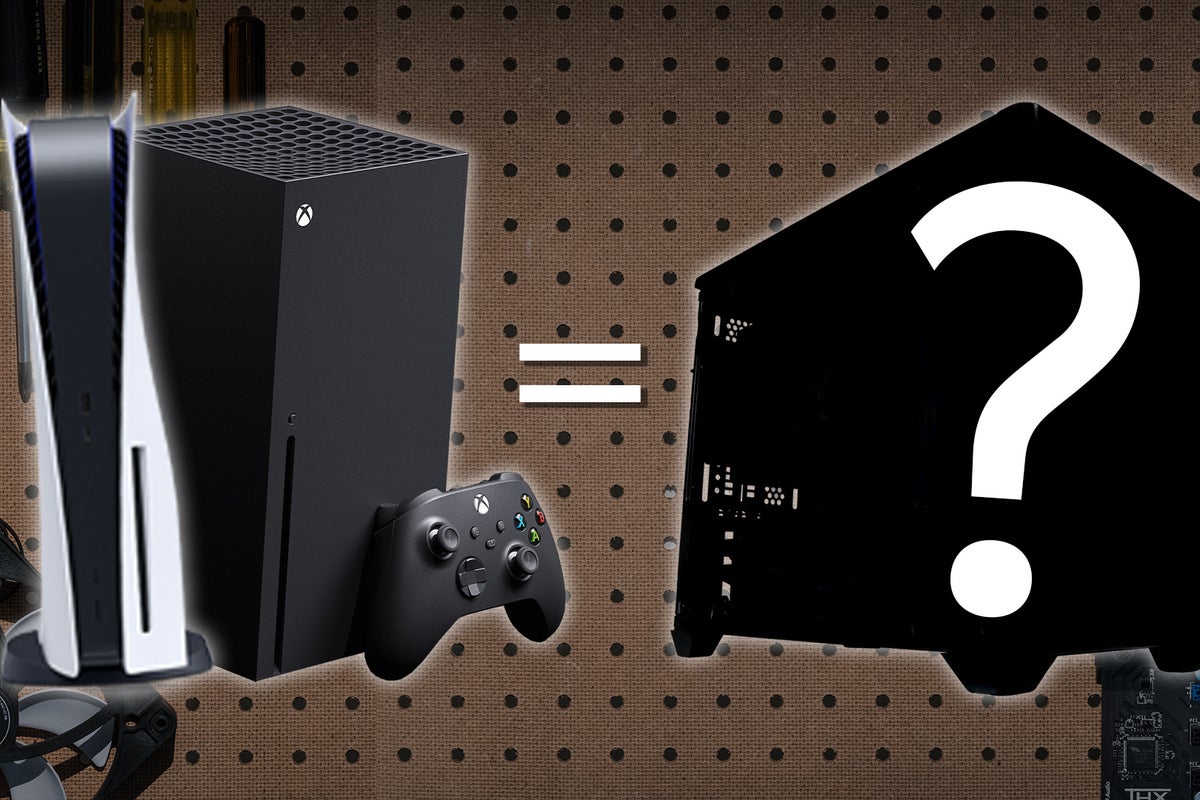 The tech specs for the Microsoft Xbox Series X and Sony PlayStation 5, which hit shelves this Tuesday and Thursday, respectively, contain a familiar list of elements for PC gamers. In fact, outside of RDNA 2, they’re all old news at this point. Looking at the next-generation consoles, you could easily think, “Why not just build a PC? It’ll only be a little more expensive.”

Everyone’s favorite Greek chorus (aka the internet) would agree. Vocal commentors like to claim that a PC equivalent to a PS5 or Xbox Series X costs as little as $800—or the “true” price of those consoles after factoring in the mandatory subscriptions for online play.

But we here at PCWorld follow both hardware launches and, more importantly, pricing over time. And I can tell you that while the console specs may be conventional, they don’t come cheap.

So how much do you have to shell out? That’s what this build project aims to answer.

Actually, this project aims to answer a second question as well: What exactly goes into a PC build designed to mimic the next-gen consoles? After all, we as PC gamers can’t even buy an RDNA 2 GPU yet. (The Radeon RX 6800 and 6800XT become available on November 18, with the 6900XT following on December 8.) Console gamers get to play on one first.

So before we dive into the PC build lists, let’s recap the PS5 and Xbox Series X specs we’re working off of:

Most of the hardware and features are easy enough to imitate. We are on PC, which necessitates some adjustments—for example, the GDDR6 memory in the PS5 and Xbox Series X gets used for both gaming and system tasks. On PC, we’ll throw in 16GB of system memory to match that number, but we won’t overthink the spec otherwise. The amount of VRAM we end up with will depend on which graphics card has the closest performance.

Which brings us to the stickiest part of these builds: Which GPUs to use. The specific performance we’re targeting is unclear right now. Marketing teams for the PS5 and Series X have thrown around terms like 4K/60, 4K/120(!), ray tracing, and 8K resolution…but neither company has outlined how often we should expect games to showcase those features, much less to what degree (e.g., graphical settings, type of ray-tracing implementation, type of 8K content).

To be fair, some of these features serve as future-proofing for these consoles’ inevitably long lives. The PS4 and Xbox One lasted seven years, while the generation before ran for eight.

This fogginess around performance isn’t helped by the fact that Nvidia just released its first set of cards using new architecture, while AMD’s new GPU doesn’t launch for another week, as mentioned above. So not only is it imprudent to buy an older video card, we can’t lock in the appropriate RDNA 2 GPU (or Ampere rival, if you don’t care about exactly matching the consoles). We don’t know yet what to expect from the Radeon RX 6800 and 6800XT—it might turn out neither one is the right graphics card for these PS5 and XBSX PC builds.

Still, we can start ballparking most of what will go into the machine, and estimate what costs to expect. So let’s get to it.

Why now? All this uncertainty around the consoles’ performance may cause some folks to question why we’re trying to answer this question now. Think of it as a snapshot to compare against later; we’re calling this a project because we’ll revisit it on a rolling basis. The PC landscape will shift and improve, and you get to come along on the journey.

Also, those internet commentors are saying you can build a PC right now for $800, not in the distant future. Naturally, I saw that as a challenge.

On the whole, this PC sticks to the basics. The matching focuses on specs, upgradability, and performance output. It does not try to adopt the PlayStation 5’s smaller footprint, nor does it attempt to be as quiet or cool. (You can of course tackle those aspects if you choose, but since most PC builders won’t focus on those things, we’re skipping them. Check out our YouTube version of this PS5 PC for a fancier, more ambitious build.)

Most parts on this list are fairly self-explanatory. The PS5’s custom AMD APU sports eight Zen 2 cores clocked at 3.5GHz, so its counterpart in this PC is an eight-core Zen 2 Ryzen 7 3700X, which has a base clock of 3.6GHz. We’ll use the included Wraith Prism cooler, which performs well for a stock cooler and even comes with a touch of RGB. (Though for this PC, we only need the blue.)

To replicate the PlayStation 5’s PCIe 4.0 SSD support, we had to opt for an X570 motherboard. B550 mobos only support a single Gen 4 SSD, and we require two M.2 slots capable of such speeds. Plus, we need Wi-Fi 6 support—and so this $180 Asus model fits the bill as the cheapest option. (Pairing a non-Wi-Fi motherboard with an add-in card ended up costing more.) As for the storage drive, we picked the most affordable 1TB Gen 4 option, which is the Sabrent Rocket model.

The GPU is the only question mark, as covered above, and so the RTX 3070 stands in as our placeholder. It may turn out to be overkill, but we don’t want to use an older-generation card. You’ll pay more for less performance, and that doesn’t seem fair to PC-building for this project. A 3070 isn’t a huge stretch, anyway—it’s a 4K/60 card, and until we know how frequently to expect (or not expect) 4K/60 from the consoles, it’s a reasonable place to start. Down the road, a Radeon RX 6800 could take its place, or perhaps even an as-yet-unannounced lower-tier card. We have to wait and see.

For the power supply and case, we went with a 750W PSU, which provides more wattage than we need but can accommodate an RTX 3080 if one is required. We then chose the most attractive of the affordable white ATX mid-tower cases available. The case doesn’t accommodate optical drives, but that’s all right. You won’t find a 4K Blu-ray drive in this build—we’re matching the digital edition of the PS5. PC gamers should find this a natural fit, since game distribution on PC went digital long ago.

As for the operating system, we managed to get a Windows 10 Pro license at a heavy discount. The PCWorld online shop periodically offers sales on licenses, and in anticipation of this build, I snagged a key. Keep an eye out for this discount to reappear to avoid dropping a full $120 on a Windows 10 Home license.

Finally, I accounted this time for the cost of a controller. Usually we don’t include peripherals like a keyboard and mouse in a build—and frankly, since we’re not trying to match the PS5 or Xbox Series X on price, it doesn’t matter for this project. But I’ve included a DualSense controller anyway to allow everyone to rest peacefully at night. Whether or not games will provide support for the controller’s adaptive triggers on PC remains to be seen though, so you can save some cash by choosing a DualShock 4 controller. (Not only is its MSRP $10 cheaper, but the DS4 goes on sale regularly.)

Overall, we’ve laid a solid foundation for our PS5 build, with some room to do more PC-like upgrades in the future. (We’re already itching to do a RAM upgrade given our browser tab habits, truth be told.) Again, the only component not yet locked down is the graphics card.

So how did we do on price? Contrary to the internet’s predictions, you’ll pay quite a bit more than $800 for a PS5-like PC build. As mocked up with an Nvidia RTX 3070, our parts list exceeds that estimate by $700. Even when comparing against the $500 disc-version of the console plus a $480 eight-year subscription for online play (assuming this generation lasts that long), the gap still stands at $500.

Our preliminary take on an Xbox Series X PC largely follows the PS5 build’s lead, but with a couple of minor tweaks to accommodate physical media. Because the Series X doesn’t have an all-digital variant, we can’t entirely skip a Blu-ray drive. We will fudge it, though.

Now, a proper 4K Blu-ray drive would actually duplicate the Series X’s capabilities, but little has changed since we last attempted to put one in a PC three years ago. You still need an Intel motherboard that supports Intel Software Guard Extensions (Intel SGX) for it to work properly, and dealing with SGX is still kind of a headache. While processor and motherboard support has improved, SGX was discovered to have security flaws earlier this year. Intel has been addressing them with patches, but sticking with AMD bypasses all that risk—after all, you will be using this computer for more than just gaming. (Plus, staying with Team Red preserves PCIe 4.0 SSD support.) Using a 4K Blu-ray drive without SGX hardware isn’t an option, either. We prefer suggesting build lists that stay on the up-and-up, and for that scenario to work, you have to circumvent DRM.

So we’re compromising and downgrading to standard Blu-ray, thus making nobody happy…but we’ll have a dang drive at least. I know, console fans: This move proves that the Xbox Series X is superior. And yes, PC builders, we could just skip an optical drive all together because “no one” uses them (outside of people on PCWorld’s The Full Nerd Discord server).

We’ll also revisit the use of an RTX 3070. For the time being, our two next-gen console builds share the same GPU, which shouldn’t matter since it’s a placeholder to meet our baseline of 4K/60. Again, we don’t know what exactly to expect from Radeon RX 6000 graphics cards; we don’t know what lower-tier cards are coming; and most importantly, we don’t actually know yet the concrete performance differences that exist between the PS5 and Xbox Series X. Eurogamer, which does superb comparisons of that very nature, points out in its review that it hasn’t even received a single game than can be played on both systems yet.

So don’t worry console fans, I haven’t forgotten that the PS5 has fewer GPU compute units than the Xbox Series X. We’ll just have to tackle that later.

Like the PS5 build, you’ll spend more than $1,500 on this Xbox Series X PC, thus killing the internet’s optimistic $800 estimate completely dead. Our current parts list costs almost double that, and even when compared against the Series X plus a $480 eight-year subscription for online play (assuming this generation lasts that long), the difference still exceeds $500.

Will the price for these builds change?

Inevitably, these initial prices will change. Outside of the inevitable drops that come as hardware ages, the cost of these builds will shift as component swaps are made. So if we end up using a lower-tier GPU, the cost could go down. But likewise, if we switch to Intel (which historically has never budged much on its suggested MSRP for processors), the price could increase.

As noted in the build names, these takes are just the first round of ballparking. We’ll narrow down the field and lock in the final parts in the coming weeks and months. In the meantime, we’ll begin collecting performance data. Speaking of…

Next page: Our actual initial build