With two sides short on confidence and creativity, even the most passionate Bremen and Cologne fans will have been tested watching matchday seven’s opener.

That the first half’s major talking point was the substitution of Cologne goalkeeper Timo Horn (Ron-Robert Zieler made his team debut) was an early red flag.

That the number of glaring errors seemed to increase the longer the game went on was another. That the goals came from a clearance gone wrong and a penalty was fitting for a game short on quality.

The point does Cologne — a team still without a win this season — more good than it does their hosts, who have now drawn four straight games 1-1.

On the face of it, Werder Bremen’s season is a major improvement on last year. Florian Kohfeldt’s side are undefeated since the opening day and have picked up 10 points from 7 games.

A team in trouble

The closer inspection that Friday night provided though, showed that Bremen are a team stuck in third gear, unable to go slower and unsure as to how to go faster. 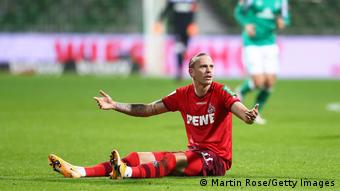 Milot Rashica has stayed but not making the move and dealing with injuries have left him looking a different player this season. Davy Klaassen’s departure might have been unavoidable but his absence is noticeable, despite the best efforts of 20-year-old Jean-Manuel Mbom. Of all the absentees though, it’s still Max Kruse who Bremen have yet to adequately replace or get over.

This leaves plenty of questions, most of them about head coach Florian Kohfeldt.

Beforehand, the 38-year-old was keen to avoid the idea that this was a must-win game for Bremen. But at home against a Cologne side that this season has been limited to say the least that’s exactly what this was for Bremen.

That Bremen didn’t win this game is a concern, although this game showed why this team failing to achieve that goal is not really a surprise.

Looking at Bremen’s schedule for the rest of 2020 though, it’s a problem that might get worse.

Bremen face Bayern, Dortmund, RB Leipzig, Wolfsburg and upstarts Stuttgart all before the year is out. By the end of that run it will be more obvious who this Werder Bremen team and whether Florian Kohfeldt is still the right man to get the best out of them.

Ivanka Trump Was Floating Above This Week’s Mess. No Longer.