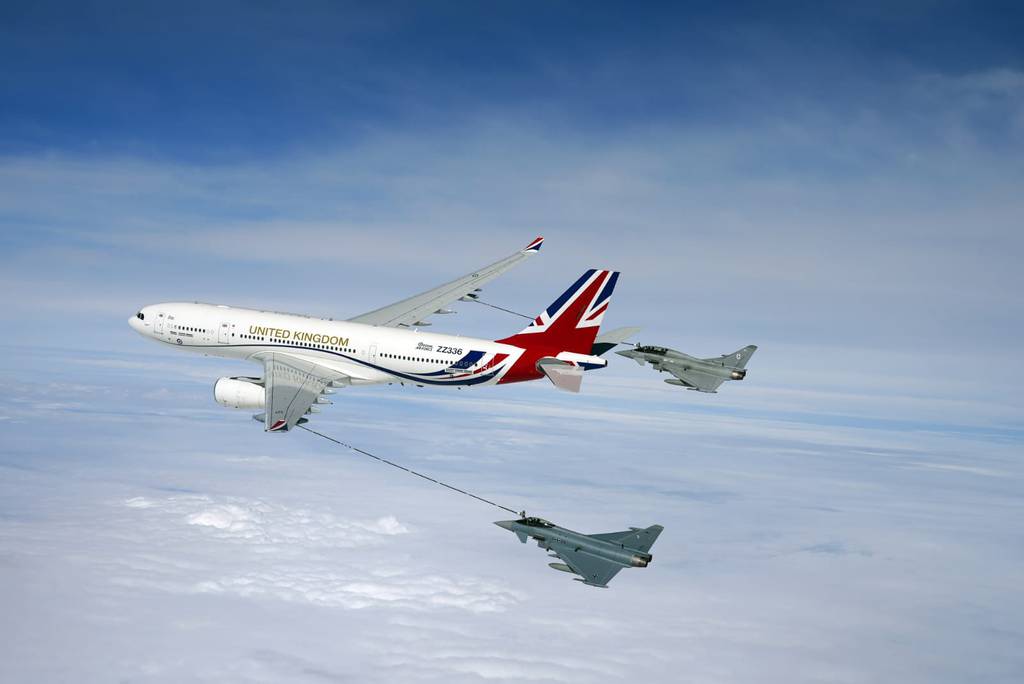 “We are putting in place now what is going to be a really big contract,” taking the program through to initial and full operating capability, said a a Ministry of Defence official briefing reporters May 24 here at the combat jet production and development site of BAE Systems.

A spokesman for the Defence Equipment and Support arm of the MoD later confirmed contract proposals had been submitted to ministers.

“A robust financial case has been submitted for investment in ECRS Mk2 and we await a decision from UK Government,” said a spokesman May 25, using shorthand for the European Common Radar System program.

BAE and radar developer Leonardo UK announced a £317 million ($400 million) deal with the government in 2020 to take ECRS Mk2 to a standard ready for integration on the Typhoon.

That money runs out at the end of the year, which is when the prototype ECRS Mk2 radar should be delivered to the BAE site at Warton and a full system critical design review completed for the production radar.

A Leonardo spokesman said the company “remains on-track to meet those milestones.”

“Further development requires further investment,” the company spokesman added. “Subject to approval, the intent will be to complete the development of ECRS Mk2 hardware and software and then integrate the new radar onto U.K. Typhoon aircraft through a four-nation program called P4E.”

Typhoon development and production is undertaken by a partnership between Britain, Germany, Italy and Spain. The British MoD is currently set to acquire 40 new sensor systems to equip its Typhoon Tranche 3 fleet.

An initial operating capability covering the radar, training, infrastructure and other requirements is set for 2030.

A date for delivery of the first Mk2-equipped Typhoon to the Royal Air Force has not yet been made available publicly.

Numbers and timings may change, though.

At the moment the upgrade is for Tranche 3 aircraft, but British Tranche 2 jets could be upgraded as well if the money can be found.

Initial operating capability “is still subject to ministerial approval as part of that [contractual] process. Our target is to bring the system into service as early as we can, so 2030 is a back stop, if we can deliver earlier we will do that,” said the defense official.

“You can imagine no doors have been closed, and there are all kinds of other bigger strategic choices that will be made that will decide [numbers], so we are giving them options. If they want to go for more Mk2s, they can. Everyone wishes we could get Mk2 even earlier,” added the official.

The 2020 BAE-Leonardo announcement relating to the development phase deal secured by the companies mentioned equipping the Typhoon aircraft with new radar from the mid-2020s.

That timing, though, was driven more by a potential export opportunity in Finland, rather than a RAF commitment to install the radar early.

The Finnish competition was eventually won by the Lockheed Martin F-35.

Typhoon is currently equipped with a mechanically scanned radar.

Germany and Spain have gone ahead with a less capable Mk1 version of the AESA radar to update their Typhoons. While the British opted for the more powerful Mk2 version the Typhoon partners continue to collaborate closely on the update program.

Italy has signaled its interest in joining the British-led Mk2 effort and has recently dispatched Italian engineers to Leonardo’s Edinburgh, Scotland, development site to work on the program.

Britain and Italy have formed what is called the Industrial Joint Team as the first step by the Rome government towards full participation in the Mk2 program.

The update is part of a wider capability improvement program aimed at maintaining Typhoon’s cutting edge, as well as de-risking technology advances ahead of the introduction of the British-led Tempest sixth-generation combat jet scheduled to start replacing the aircraft around 2035-2040.

More powerful computers and mission systems upgrades are among the intended enhancements, and BAE officials showed reporters a new cockpit featuring a single large screen and no head-up display for the Typhoon which they would like to see in service by 2030.

For now, much of the focus for Britain’s air combat industry is on the game-changing ECRS Mk2.

“I can’t stress enough how much of a significant leap Mk2 is going to be for the UK military and industry and what we are proposing to do,” the defense official said.

The first radar hardware is on track to be delivered to Warton later this year. The first test flight also is expected in 2020, according to the MoD.

Andrew Chuter is the United Kingdom correspondent for Defense News.