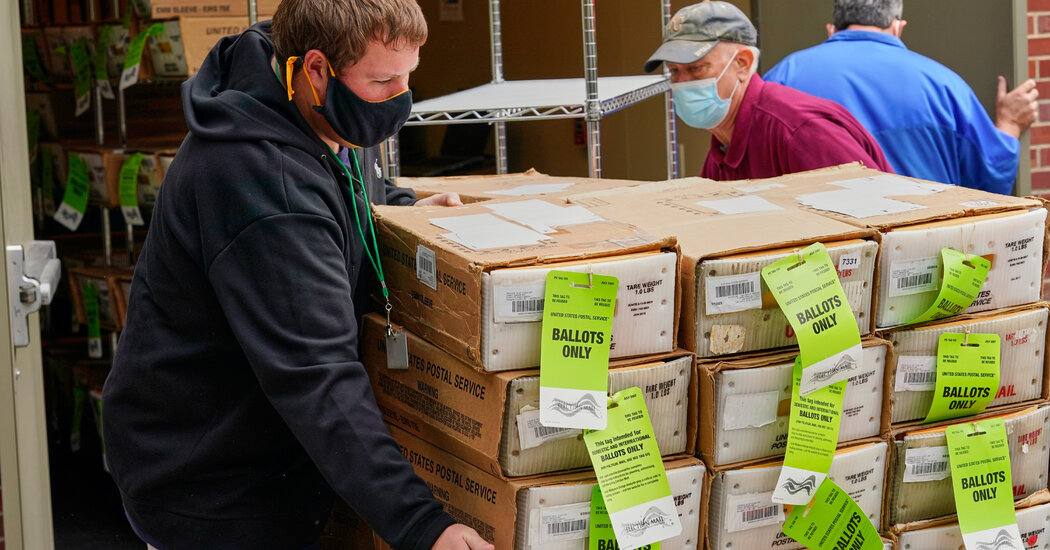 WASHINGTON — For months, Republican strategists have grimaced as President Trump has railed against mail-in voting as “a scam” rife with “fraud,” worried that his dissemination of misinformation would kneecap the party’s traditionally successful efforts in getting many of its supporters to cast ballots by mail.

Five weeks before Election Day, their fears have been borne out as Democrats have built a huge lead in requests for absentee ballots in crucial swing states. But now, that same partisan divide has become a concern for Democrats, too.

As the surge in voting by mail during the pandemic tests the resources of election officials across the country, widespread problems — including the rejection of ballots at high rates, their late transmission by election boards or the failure of the Postal Service to deliver them on time — could lead to more Democrats’ votes going uncounted.

That worry has prompted some Democratic-aligned political groups to shift from encouraging mail-in voting and instead promote in-person early-voting centers where available.

“I’m concerned with Donald Trump and the Republican Party’s attempt to limit votes,” said Quentin James, the founder and president of the Collective PAC, which is dedicated to electing Black lawmakers. “They’re afraid of the almost five million African-Americans who didn’t vote in 2016 coming out and voting.”

Mr. James’s group plans to spend $7 million in large cities in battleground states — such as Atlanta, Charlotte, Detroit, Milwaukee and Philadelphia — to encourage in-person voting in Black communities, a strategy he hopes will subject fewer of those voters to the Republican legal challenges that are bound to occur with ballots sent by mail. He is particularly concerned about reports that mail-in ballots from younger Black and Hispanic voters are rejected at higher rates than those of older white voters.

So far, Democrats have opened up a large lead in absentee-ballot requests in most of the key battleground states that release such data.

In Florida, where Republicans have long prided themselves on their vote-by-mail prowess, nearly 2.3 million Democrats have requested a mail-in ballot, compared with about 1.6 million Republicans.

In North Carolina, Democrats are outpacing Republicans 524,000 requests to 195,000, and in Iowa, about 319,000 Democrats have requested a mail-in ballot, nearly double the Republican total.

The trend has prompted hand-wringing from Republican campaigns, large and small. If Republicans bet too heavily on their supporters’ voting in-person on Election Day, a local coronavirus outbreak or even bad weather could derail their turnout. Party strategists said they were particularly worried about their party’s vote-by-mail performance with seniors, an important voting bloc, who may be especially wary of going to the polls during a pandemic.

“One rule of campaigns is to get as many of your voters to vote as early as possible,” said Glen Bolger, a top Republican pollster. “The president basically has sent the message to Republicans not to vote by mail, and the Republicans are listening.”

Republican lawmakers and operatives have quietly urged the president’s team to change his messaging about mail-in voting. Mr. Trump won Florida in 2016 in part because of the advantage Republicans had in voting by mail.

Party leaders including Senator Mitch McConnell of Kentucky, the majority leader, have publicly said that people casting ballots by mail could expect their votes will be counted.

“I want Republicans to vote by mail, by absentee. I want them to go to the polls,” Representative Kevin McCarthy of California, the minority leader, said when asked about the partisan divide in mail-in ballot requests. “We’ve got our work cut out for us.”

Last week, in a message to his supporters in Florida, Mr. Trump was temporarily in sync with the party’s playbook. “Vote-by-mail ballots in my home state of FLORIDA begin going out TODAY!” he wrote on Twitter. “Make sure to request yours, fill it out & send it in. Request yours today.”

But the president has more often denounced voting by mail, issuing baseless claims that it is a way to rig the election against him and arguing that mail-in ballots are inherently suspect. During his debate on Tuesday with Joseph R. Biden Jr., the Democratic presidential nominee, Mr. Trump once again assailed mail-in balloting, citing a handful of ballots in Pennsylvania that were inappropriately discarded to argue that Democrats were using the mail to cheat.

Historically, mail-in voting has not bestowed a partisan advantage on either side. But Mr. Trump’s talk has turned the practice itself into a political issue. In polls, many more Democrats than Republicans have said they planned to vote by mail this election.

Beyond the presidential race, the divide could also mean trouble for endangered Republican incumbents including Senators Joni Ernst of Iowa and Thom Tillis of North Carolina, and Representative Scott Perry of Pennsylvania.

“Republicans should be worried,” said Michael Steele, a former chairman of the Republican National Committee, who is part of a group of Republicans opposing Mr. Trump’s re-election. “In 2010, I put in place a significant turnout strategy around getting mail-in ballots in the hands of my seniors. This is going to hurt Republicans in down-ballot races.”

The Republican strategist Scott Jennings said that both parties were “playing with fire” with their messaging around voting by mail but that Democrats might suffer more.

“They may be driving people into a system they’re not familiar with, and they’re risking a high rate of ballot rejection,” Mr. Jennings said of Democrats. “Both parties have room for worry.”

In 2016, more than 318,000 mail-in ballots were rejected during the presidential election. This year, with a huge increase in mail-in ballots, and slowdowns in mail delivery, experts have estimated the number of mail-in ballots that are disqualified may exceed one million. While more than 140 million Americans are expected to vote, the discarded ballots could make a difference in competitive states. The rejection rate for mail ballots in most states is typically 1 to 2 percent, with many ballots uncounted because they arrived to election officials too late, the voter forgot to sign the ballot or the signature on the ballot did not match the one in a voter’s file.

Republican lawyers are poised to challenge mail-in ballots in nearly every battleground state, with the goal of persuading election officials or judges to throw out mailed-in votes based on problems with signatures or other technicalities.

The Stanford-M.I.T. Healthy Elections Project is tracking more than 320 lawsuits in 44 states over the 2020 elections. While the details of the suits vary — be it a dispute over counting ballots that lack postage stamps in Nevada or a fight over the universal mailing of ballots to seniors in Texas — most center on Democrats wanting to count more ballots, and Republicans trying to block ballots from being counted, citing concerns with voter fraud.

A recent ruling in Pennsylvania could endanger more than 100,000 votes in the November election, according to Lisa M. Deeley, the chairwoman of the Philadelphia City Commissioners.

“This is not a partisan issue,” Ms. Deeley, a Democrat, wrote in a recent letter objecting to the State Supreme Court’s decision to disallow ballots that arrived without the requisite secrecy envelope, which are known as naked ballots. “We are talking about the voting rights of constituents, whether they be Democrats, Republicans or independents whose ballots will be needlessly set aside.”

Democrats are leaving nothing to chance. The party’s Senate campaign arm has hired a voter protection director and has joined with the House campaign committee to invest more than $10 million in voting rights litigation.

The committees are recommending that voters cast their ballots as early as possible, whether by mail, at a drop box, or safely in person and early.

“Certainly some legislators and court rulings are making it more challenging, but because of that, we’re doing everything we can to make sure voters know how they can safely cast a ballot so their vote does get counted. ” said Lucy Solomon, a political director for the progressive group Indivisible. “As we get closer to Election Day, especially with the concerns around the post office, we definitely will switch over to encouraging folks to vote early or in person on Election Day.”

The large mail-in advantage for Democrats in Iowa shows that “voters are enthusiastic to elect new leaders this fall,” said Izzi Levy, a spokeswoman for Theresa Greenfield, a Democrat who is in a tight race with Ms. Ernst.

But Ms. Greenfield’s campaign will not be relying on mail alone. Her team, Ms. Levy said, is “working to help voters cast their ballot in a way that’s easiest for them — whether that’s by mail, in-person or dropping it off.”

England lose Knight and Jones in first over