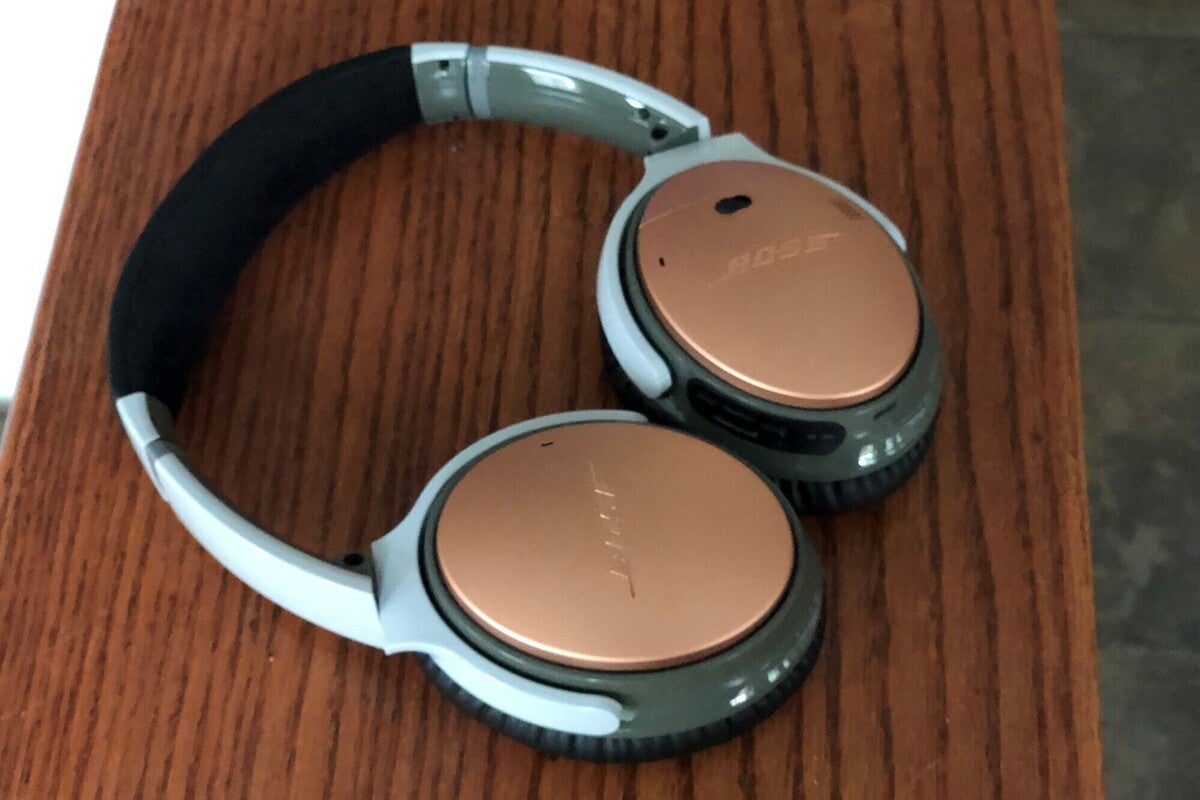 With its place at the top of the Bose line supplanted by the sleeker Bose Noise Cancelling 700, and increasingly competitive rivals nipping at its heels, Bose has been cutting away at the retail price of its QC 35 II, the bread-and-butter entry in its over-the-ear noise-cancelling headphone lineup.

I spotted a pre-Black Friday sale on the Bose website that knocks the price of these cans down from $350 to $200 if you by order Sunday, November 8 (they’re currently $199 on Amazon). Drop another $50 and you can customize several elements—including the exterior of the ear cups and the inside of the headband—with various finishes. This adds a bit of wait time to your order, as you might expect, but I found it to be great fun. More on that later. Late reading this? The same sale price will be in effect from November 22-to December 1. Bose also offers a gamer-oriented variant—the Quiet Comfort 35 II Gaming Headset—that comes with a boom mic and a PC desktop controller.

This review is part of TechHive’s coverage of the best headphones, where you’ll find reviews of competing products, plus a buyer’s guide to the features you should consider when shopping for this type of product.

Bargain hunting comes to me naturally. As I kid, I remember my father would only ever buy a car at the end of the model year, when the dealer was anxious to clear out the “leftover” inventory. When it came to sound gear, dad would counsel me to either look for a last year’s model or else “the second from the top” in a line of receivers, turntables, or speakers, arguing that the first “step down” piece shared virtually all the same features and performance-tuning components as the line’s standard-bearer—minus only an extra input, maybe fitted in a smaller enclosure, or lacking the words “Elite Series” on the cabinet.

With the QC 35 II, a case can be made that these headphones are just as good if not better than the NC 700 also in my review collection. Yes, those newer, pricier headphones boast cleaner styling, they have more “sensing” microphones to shush unwanted noise and clarify your voice when making phone calls in a public setting, and the NC 700s also offer more finite gradations of noise cancelling: 10 levels versus just two (plus “off”) on the QC 35 II.

Sound presentation is neutral, natural, and quite fine on both models, although higher frequencies are extended a tad more on the NC 700. Neither Bose model will bust your ear drums with bombastic bass, but that’s a good thing, as far as I’m concerned. I was thrilled almost to tears by the QC 35 II’s sweet sonorities, even-tempered balance, and depth of presentation on my favorite Keith Jarrett (+ Euro group) originals album My Song beaming in Qobuz “CD-quality” resolution (and then AAC) from an iPhone 12 Pro. So sad to learn this amazing pianist/composer/improvisor has suffered two incapacitating strokes.

Later, I earned a surprisingly big-screen impression of the Netflix series The Queen’s Gambit even watching on an 11-inch iPad. The Bluetooth-connected QC 35 IIs whipped up a 3D-ish sound field in my head, marked with crystal-clear dialogue, weirdly effective directional audio cues, sometimes thunderous orchestral scoring, and snappy throwback hits from the 1960s (think Kinks, George Fame, Shocking Blue). Who knew a story about a brilliant (and troubled) young female chess wiz could provide such rousing and riveting fun?

The new Tom Petty Wildflowers & The Rest collection digging deeper into his dark, twang-rock divorce sessions likewise held my attention for several hours with no fatigue. With windy string charts and balmy bossa nova rhythms, fragile chanteuse Melody Gardot’s new Sunset in the Blue album buffeted my brain like a billowy cloud. C’est Magnifique! And while I ain’t the biggest hip-hop fan, I could appreciate the clarity of expression, musical invention, and bubbly bass depths plumed on a Tidal mix of hip-hop hits from the likes of Jeezy and Yo Gotti (Vroom, Vroom) and Anderson.Paak (a sparkle-plenty Jewelz).

Both Bose headphones support the standard SBC and better AAC Bluetooth codecs, the latter the top act on iOS products. Neither model can handle the higher-res LDAC, LDHC, aptX, or aptX HD mobile codecs, which might disappoint Android users and folks who own some models of high-end digital audio players. That said, I detected negligible sonic differences during A/B listening tests with the aforementioned Keith Jarrett set wirelessly and then wired with a 3.5mm cable to a Sony CD portable.

The QC 35 II show their age with Bluetooth 4.1 support, versus the NC 700’s support for Bluetooth 5.0, but the elder model still managed to pick up a stable signal from my new iPhone one floor (and at least 30 feet) away. Both sets of Bose headphones swiftly charge in 2.5 hours for 20 hours maximum Bluetooth playback (40 hours on the QC 35 II if ANC is switched off). With just 15 minutes of fast charging, you can pump up the QC 35 II’s battery for 2.5 hours of play (you’ll get an additional hour on the NC 700).

Some will grouse about the old-school micro-USB jack (and cable) used to charge the QC 35 II, as compared to USB-C on the NC 700s; the latter is easier to plug in and is the favored connector on modern Android phones. The supplied cable in both cases is merely 12 inches foot long, which might be a restriction imposed by the limited interior dimensions of the carrying cases provided with each.

I actually prefer dealing with the QC 35 II’s mechanical volume and control buttons (located on the right ear cup) to swipe track, volume and phone call operations than I do working the conductive touch panel on the NC 700 (ditto for the arch-rival Sony’s WH-1000XM4). A right-hand-cup-mounted power/Bluetooth connection slider switch on the QC 35 II is likewise easier to locate and use.

As with some of Bose’s portable wireless speakers, two pairs of Bose’s 35-series headphones can “audio share” one Bluetooth stream, a trick that’s not possible with NC 700. The QC 35 II can also simultaneously connect to and interact with two smart devices, which is useful for pausing music or a video playing on one to then answer an incoming phone call on the other.

Then there’s the whole comfort thing. While the sturdy, sculpted aluminum band on the Bose NC 700 would probably bounce back better if you sat on it, the “impact-resistant materials, glass-filled nylon and stainless steel” parts in the QC 35 II make it lighter (by almost an ounce), more adept at cup swiveling and tilting, and—as I mentioned earlier—wonderfully customizable. I’ve also found the cushioning on the inside top of the QC 35 headband to be wider and plusher and its “synthetic protein leather”-wrapped ear cups are a tad more charming and soft than the harder clamping (and better gripping, if you’re active) cups on the NC 700.

In sum, this set of phones still lives up to its “Quiet Comfort” billing. Not only does the noise cancelling (active and passive) help create a private cocoon of calm—even tamping down some major street-dig disturbances outside my door—it does so with a physical and sound-contouring comfort level that lasts and lasts. Most headphones eventually start squeezing the arms of my reading glasses into my temples. Not these. Most headphones make my ears sweat. That happens only on really hot days with these.

Most troubling is the way other headphones with exaggerated bass and treble response eventually make my inner ears itch. These don’t. The bottom line is that Bose has finessed a pair of headphones that are suitable for wearing and listening (or just background ambient-noise blocking) for large chunks of your day—four or five hours straight at least. That’s a special gift.

Make them your own

There’s some truth to the so-called “Ikea effect,” the notion that you’ll value something more if you have a hand in its creation. I feel an extra jolt of fun very time I put on my custom-built QC 35 II, because these things are mine, just mine.

Go onto Bose’s website and you can choose the individual color you’d like for each of these component parts: Ear cups, outer headband, inner headband, and spacers. As you make your selections, an on-screen image of the assembled headphone shifts to show how it comes together. Options include an array of bright colors (royal blue, poppy red, bright yellow, bright orange, light green, pink pop gloss, purple, and plum), a bunch of neutral colors (jet black, star gray gloss, smokey white, aquatic teal, night navy, spring sage, and dark green), and several matte metallic colors (asteroid, black, silver, gold, rose gold, and copper.) Bose calculates you can put these together in more than five million combinations.

I went for a combo of copper caps (then end pieces), spring sage cups (the surrounding trim pieces), a star gray outer headband, spring sage inner headband, with asteroid metallic-gray spacers. ‘Twas a gleeful, pop-art color combo evoking a long-gone Sharp boom box I once treasured, and daringly mod Euro-brand TVs I used to ogle at the IFA electronics fair in Berlin.  Now festooning my noggin, these customized music makers are a statement that still jumps out of the crowd and will never be mistaken for anybody else’s boring black headphones. Does that make the music sound better? You bet!

A cautionary note: Don’t be surprised if the colors on the actual product prove a tad hotter than they did on your computer screen, popping especially under halogen bulbs and direct sunlight. I forgot that I’d turned down the brightness on my iMac screen. Under some illumination, my copper-tone caps could pass for rose gold. I still like ‘em, though.

Also, if you’re thinking about ordering a customized pair for a holiday gift, don’t delay. In late August, I got my order processed, assembled (in Mexico), and shipped to the east coast in just nine days—that’s pretty darned fast. As of this writing, delivery time is five to seven weeks.

Other options exist if you’d like to spruce up the Bose QC 35 or QC 25 you already own. Check out decal cover-ups available from the likes of SlickWraps and Skin Sticker, the latter of which were selling for a bargain $9.14 as of this writing. I also found a company called ColorWare that sells custom-painted pairs of QC 35 II for $429, with a promised two-week delivery. All attest to the popularity of Bose’s standard-setting noise cancelling headphones.

Researchers discover that privacy-preserving tools leave private data anything but