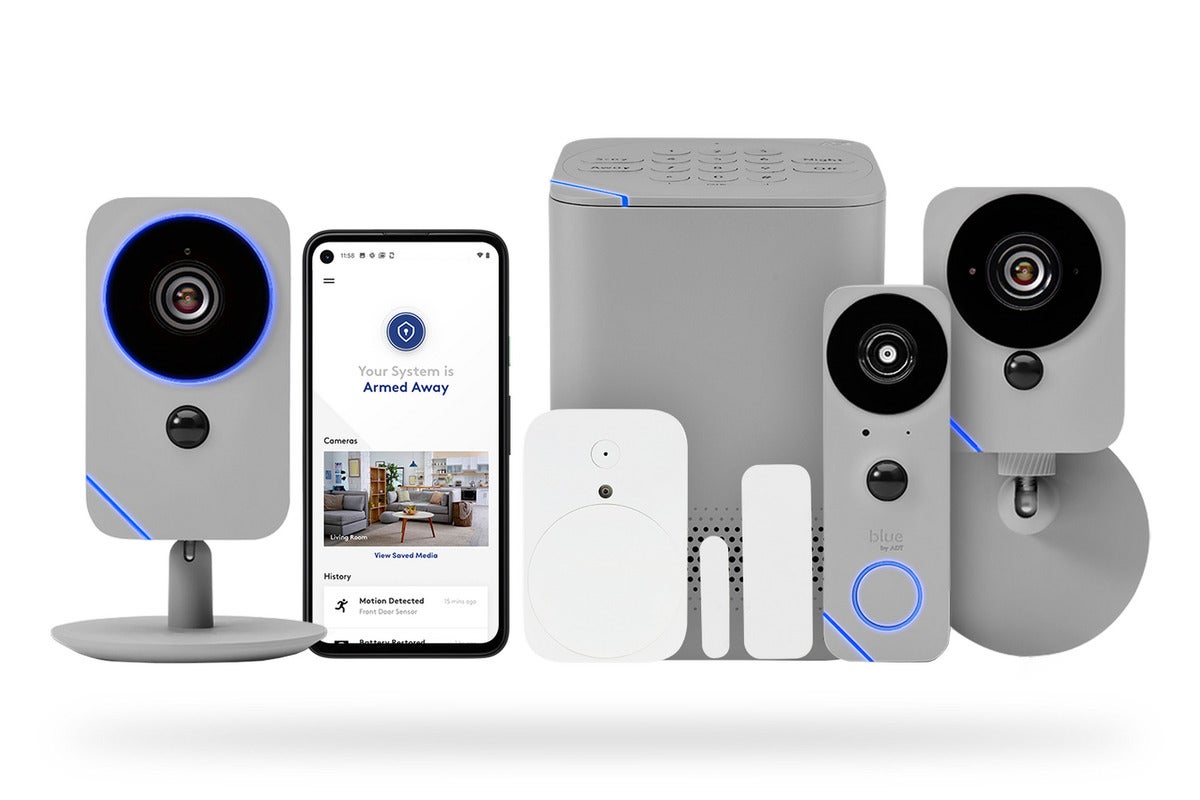 Early last year, security giant ADT bought LifeShield, a home security brand that changed hands a few times over its 16-year life before ending up in the pocket of its current owner. LifeShield wasn’t a runaway hit with this reviewer—I gave it 2.5 stars in late 2018—and ADT seems to have had some level of agreement with that assessment. The brand was quietly killed when ADT announced its successor at CES in January 2020, and finally LifeShield’s replacement, Blue by ADT, is actually here.

Two years is a lot of time to learn from the mistakes of the past, and to be sure, ADT has figured out much of what made LifeShield such a problematic offer. For starters, the entire business model has changed. LifeShield’s hardware was essentially free. You instead paid for it as part of a $30- to $40-per-month monitoring plan, which you were locked into for three years.

This review is part of TechHive’s coverage of the best smart home systems, where you’ll find reviews of competing products, plus a buyer’s guide to the features you should consider when shopping for this type of product.

Blue by ADT takes the entirely opposite approach. You buy the hardware up front (and you own it instead of lease it), and professional monitoring is completely optional. If you choose to upgrade to professional monitoring—the same service you get with a traditional ADT system—it’s $20 per month flat, with no long-term contract required.

Blue by ADT is available in several bundles. The $300 Starter Plus System, which the company sent me, includes the base station (which includes a numeric keypad and siren), four door/window sensors, and two motion sensors. I was also sent two flood sensors (an extra $35 each), a doorbell camera, an indoor camera, and an outdoor camera. Those three devices cost $200 each as add-ons. So, the total cost for the system as reviewed would $970. That’s not the cheapest price for a DIY security system, but it’s not outrageous; plus, you can start with just the basics and add the extra components over time as your budget allows.

It took some effort to get going with Blue by ADT, starting with the unboxing. Like LifeShield, Blue is dramatically overpackaged with every component seemingly locked up in its own box and a bag inside that box, ad infinitum. I had to open or remove six different boxes or inserts just to get to the power adapter for the hub—and that’s just the first component. I’m all for keeping products safe and secure during transit, but this is just too much.

Once I finally got everything unboxed, I immediately ran into my biggest issue with the system. After registration, a firmware upgrade pushed to the hub caused it to freeze, to the point where I couldn’t interact with it at all. ADT wisely lets you manage your system via web browser as well as its mobile app, so after the app stopped responding I tried to work with the unit via my PC. Alas, things went further south from here.

Adding sensors became erratic, and the system began duplicating them, to the point where I soon had four clones of the same flood sensor appearing in the system. I took the matter up with tech support and even they were unable to factory reset the hub. Eventually I was sent an entirely new collection of the same components, with which I started over in my testing.

After unboxing everything once again, I became nervous when a firmware update on the replacement hub also caused the Blue by ADT app to hang, even though I waited 45 minutes for the update to complete. Finally I quit the app, relaunched it, and tried again, and on my second try the update was at last successful and I could interact with the unit as intended.

In working with Blue by ADT, I quickly found that it keeps one of LifeShield’s best features: Sensors come pre-paired, so all you need to do is remove the plastic tab that blocks the battery from engaging and they quickly appear in the app with just a couple of taps. There are some misleading instructions—the app tells you to insert a battery in one sensor even though it’s already installed—but it’s otherwise pretty straightforward. Pro tip: The sensors also automatically update their firmware after they’re powered up, so give them 15 to 30 minutes to settle down before you start running through any advanced settings and configuration.

For the most part, I found the Blue by ADT security products to be effective and capable. The hub and cameras both use 2.4GHz Wi-Fi to connect to your router, while the sensors all use the Z-Wave protocol to communicate with the hub. (As with other Z-Wave systems, such as Vivint and Abode, you can connect additional Z-Wave devices to the hub with a little finagling.)

The only major trouble I encountered in day to day operation was a hiccup with a door sensor, which would register when it opened but not when it closed. This eventually led to a persistent alert in the app that the door had been left open, feven though it wasn’t. A number of force quits (and force open/close door operations) would right things, but the problem kept recurring throughout my testing. I later had a similar problem with the indoor camera abruptly going offline, forcing a power cycle to bring it back. My other main issue with the app is that it can be generally unstable, freezing completely at random times and requiring a force quit to recover. None of these are major problems, but in looking for a security system, most users want absolute reliability, or as close to it as possible.

Other than those issues, the hub normally had no issues picking up activity from both the motion sensor and the cameras, and the flood sensor was quick to alert me when water was present. Alerting is one of the things that Blue by ADT does best. When the flood sensor is tripped, for example, the sensor itself starts beeping, the hub starts beeping, a push notification is sent to your phone, and an email is dispatched, all by default. Text messages are also an option, and professional monitoring would add another layer of security on top of this. Most of these notifications can be disabled if it becomes too much, but you’ll need to do some digging around in the app to find all the various options.

Blue’s cameras are all capable if somewhat pricey 1080p units with 130-degree fields of view that come with one day of free cloud storage, which is expandable to 60 days if you pay $3 per month per camera or $13 per month for unlimited cameras. TechHive contributor Martyn Williams previously reviewed the indoor, outdoor, and doorbell cameras, and nothing seems to have changed since his writeups. One quirk in using the cameras with the Blue by ADT Hub is that they’re a bit siloed from the rest of the system during setup. For example, even after you’ve set up the Hub’s Wi-Fi, you must re-enter the same settings to configure a camera. After that, you do have access to sensors and camera feeds in a single interface, which is always handy.

Blue by ADT also includes a basic but functional rules engine to automate various behaviors, but the most use I got out of this was in setting up a rule to automatically disarm the alarm every morning at dawn. You’ll likely get more use out of automations—tying sensors to (non-Z-Wave) lights, for example—from Blue by ADT’s support for IFTTT, Alexa, or Google Assistant.

Blue by ADT isn’t the cheapest home security option on the market, but the company is clearly hoping that you’ll be willing to pay a little extra in order to be connected with the ADT brand. This easily makes the most sense if you’re planning to upgrade to professional monitoring, where ADT adds the most value to this equation. Otherwise, if you plan instead to go it alone, you can save a good amount of money by looking at cheaper options—especially if you need cameras—without really sacrificing any features or security.

Analysis: While Trump sulks, Americans get sick and die

ExpressVPN review: This speedy VPN is worth the price

Amazon announces general availability of Lookout for Vision, a cloud service that…

ViacomCBS says Paramount+ will cost $5/month with ads and $10/month without ads; the…