Biden says voters have given him a ‘mandate for action’ 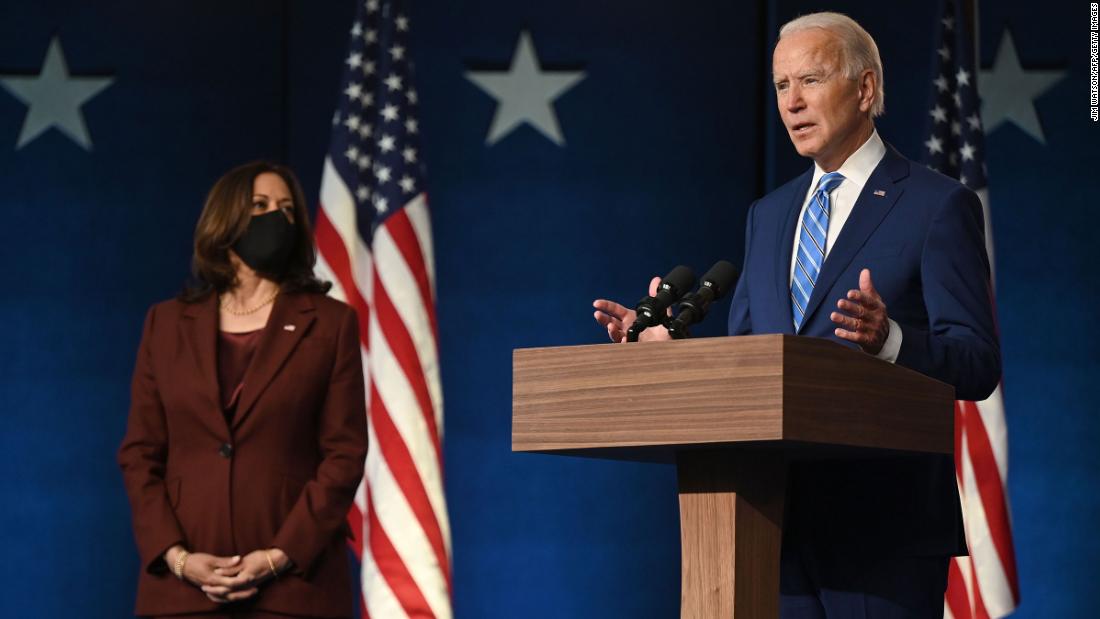 Voters who cast more ballots for Biden and his running mate, California Sen. Kamala Harris, gave them “a mandate for action,” he said.

Biden’s remarks capped a day of watching and waiting for his campaign, which is eager to see the former vice president declared the winner as his lead grows in Georgia, Nevada and Pennsylvania and remains sizable in Arizona. If he wins all four states, he would earn 306 electoral votes. According to CNN’s projections, Biden currently has 253 electoral votes — 17 shy of the 270 he needs to become president-elect.

Biden said he is “going to win this race,” touting his leads in key states’ vote counts and growing popular-vote advantage over President Donald Trump as he insisted that Americans had “given us a mandate for action.”

The tallies in Arizona, Georgia, Nevada and Pennsylvania — though networks have not projected a winner — tell “a clear and convincing story: We’re going to win this race,” the former vice president said in a speech late Friday night in Wilmington, Delaware.

“The people spoke — more than 74 million Americans — and they spoke loudly for our ticket. And while we’re waiting for a final result, I want people to know we’re not waiting to get work done,” he said.

Biden acknowledged that waiting for votes to be counted in states with neck-and-neck races “can be numbing.” But, he said, it’s becoming clearer by the hour that a record number of Americans “chose change.”

“I want you to know that I’ll work as hard for those who voted against me as those who voted for me. That’s the job,” Biden said. “We don’t have any more time to waste on partisan warfare.”

In the speech, Biden pointed to his and Harris’ meetings Thursday with public health experts and economists as coronavirus cases continue to spike, setting new records with 125,000 daily infections on Friday.

Biden’s team is also preparing for a stark reality: If he wins, he will have to fight for the legitimacy of his victory.

His advisers have mounted an aggressive behind-the-scenes push to get his supporters — and, even more importantly, Republicans — to help validate the sanctity of the election.

The Biden campaign took note of President Donald Trump’s dire tone in the White House on Thursday night and began a plan that is underway today to get his old allies in the Senate — and others from a lifetime in public life — to speak to the legitimacy of the election.

His campaign also made clear that a Trump concession is not necessary. “The American people will decide this election. And the United States government is perfectly capable of escorting trespassers out of the White House,” Biden campaign spokesman Andrew Bates said in a statement Friday morning.

Biden does not plan to wait for any of Trump’s legal challenges to be settled, a person familiar with the plan said, and intends to immediately shift into mode of President-elect to avoid ceding any momentum.

The Biden transition team has been working behind-the-scenes for months — as required of all candidates seeking the presidency — but the urgency of the plan is being seen by Biden advisers as even more importance in the wake of Trump’s questioning the legitimacy of the election.

One of the most important conversations Biden will have is with Senate Majority Leader Mitch McConnell of Kentucky.

The two men have not spoken yet — a Biden aide said that would be premature and it hasn’t happened — but they expect that call to be made later today or soon, depending on the timing of the race being called.

The Kentucky Republican will play a key role in approving members of the Biden Cabinet if Republicans continue to hold their majority — which even Democrats concede is likely, with party control potentially hinging on two January 5 runoffs for Senate seats in Georgia.

Biden and McConnell have a long relationship, serving together in the Senate for decades, but also working closely and cutting deals during former President Barack Obama’s administration.

“He will need that relationship more than ever now,” a friend of Biden’s said.

For McConnell’s part, he intends to take a remarkably cautious approach to Biden — given the sensitivity surrounding Trump’s expected refusal to concede — but a person close to him said he will speak to Biden when the time is right and will be eager to do so.

Biden sought to project confidence and competence on Thursday, attending a briefing on the coronavirus pandemic — a crisis that he could soon be tasked with managing — and delivering a short speech in Wilmington.

“Stay calm. The process is working. The count is being completed,” he said as votes were being counted in Arizona, Georgia, Nevada and Pennsylvania, with Biden at 253 electoral votes, according to CNN’s projections, of the 270 he needs to clinch the presidency.

“Each ballot must be counted, and that’s how it should be. Democracy is sometimes messy; it sometimes requires a little patience as well,” he said.

CLARIFICATION: This story previously quoted a McConnell adviser saying a call between Biden and the Senate Majority Leader may occur after a projected win. A McConnell aide tells CNN they have no information on the timing.

HBO Max: Everything to know (and why you can’t watch on Roku)

Mark Meadows, Trump’s Chief of Staff, Has the Coronavirus