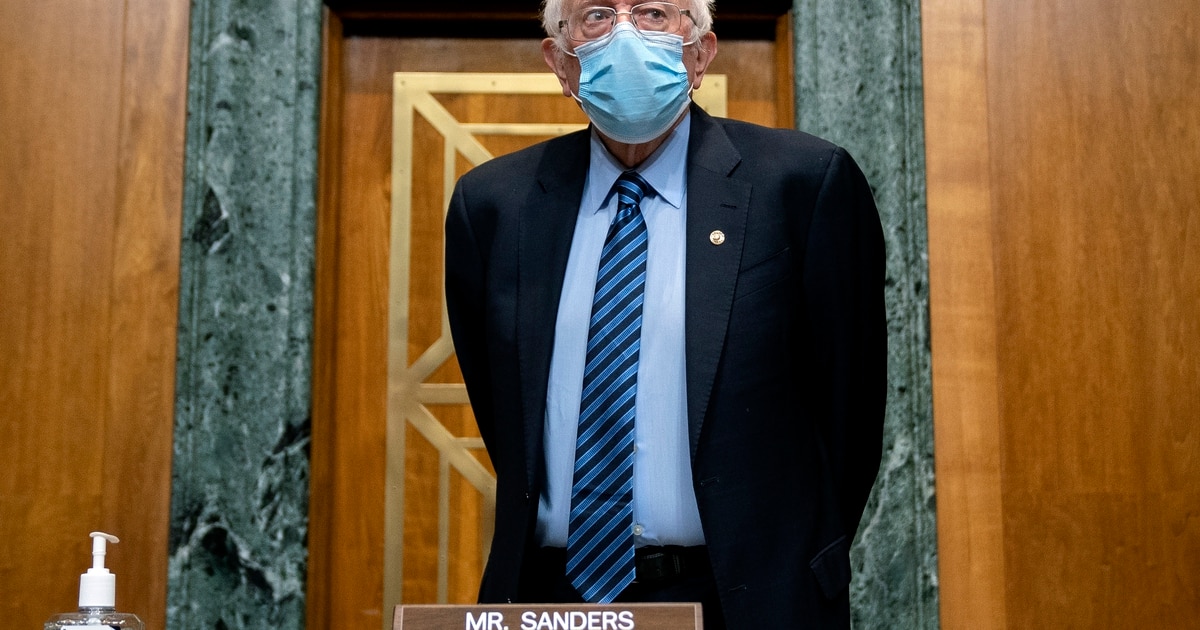 WASHINGTON ― Sen. Bernie Sanders, the left-leaning chairman of the Senate Budget Committee, is once again asking you to think about cuts to defense spending.

But Democratic moderates may temper just how aggressively progressives can push for a reduction in President Joe Biden’s forthcoming $715 billion Pentagon budget proposal, which is flat when adjusted for inflation.

“If we’re going to make cuts ― and we should always analyze whether we should ― we shouldn’t make them non-strategically,” said Kaine, who serves as the Readiness and Management Support Subcommittee chairman.

Kaine recalled how Congress controversially enacted a broad Pentagon headquarters staffing cut that inadvertently laid off a third of the personnel overseeing military housing. That caused a “massive problem,” he said.

“So if we’re going to make cuts, we should really try to find what’s fraudulent, what’s abusive, what’s wasteful. The across-the-board stuff: You end up hurting yourself, and then it comes back to bite you later,” he added.

In Washington, the growing influence of party moderates has put some of Biden’s priorities in jeopardy, including a proposed minimum wage increase. But in the case of defense spending, moderates may be the bulwark against progressives who say the money would be better spent combating the coronavirus pandemic.

Sanders pointed to the Pentagon’s longtime failure to pass an audit, its acquisition program cost overruns, the “excessive” benefits for defense executives as well as the “revolving door where many of our top military officials end up on the boards of directors of these major defense companies.”

“At a time when we have so many unmet needs in America, we’ve got to ask ourselves why we are spending more on the military than the next 12 nations combined,” Sanders said. “How does it happen that about half of the $740 billion annual defense budget goes not to our troops, but to defense contractors, while virtually all of them have paid huge fines for misconduct and fraud while making massive profits on those contracts?”

Sanders said the chief executives of Lockheed Martin, Raytheon Technologies and Boeing declined an invitation to testify from himself and Sen. Chuck Grassley, R-Iowa.

At a think tank event Wednesday, House Armed Services Committee member Anthony Brown, D-Md., said he would be “absolutely” support more than Biden’s request and called for a “robust” level of defense spending. A 10 percent cut, he said, would be “devastating” to military readiness and modernization.

The Pentagon’s budget is meant to keep the country safe while also funding research and development efforts with civilian applications as well as providing care for service members and their families.

“We should recognize and accept that domestic programs and spending bolster our national security. And conversely, investing in our military will help promote, protect and preserve the opportunities that we seek to create right here at home,” Brown said.

The top line is not the only Democratic split: A bipartisan group of 130 House lawmakers signed a letter this month urging continued financial support for the F-35 Joint Strike Fighter program, signaling a potential roadblock for Democratic lawmakers hoping to cut F-35 procurement in fiscal 2022.

“I’m a big believer in the F-35,” said Brown, one of the signatories, adding that he was initially skeptical of the Air Force’s plan to find other fighter jets, including Boeing’s F-15EX, for which he now sees a role in the service.

Lead Republicans on defense have sought a 3-5 percent increase in defense spending, which they argue is needed to deter Russia and China. However, it’s an open question whether centrist Democrats will be able to forge an alliance with them to pass defense policy and spending bills.

The American Enterprise Institute’s Mackenzie Eaglen noted that Senate Minority Leader Mitch McConnell, R-Ky., wants to work with the White House on China competition, something she said will be manifest through robust defense spending.

“I don’t think it’s necessarily a hard, red line on 3-5 percent growth,” Eaglen said, so long as there’s a significant investment in military readiness. “Flat is back for the department. I do think there’s a push for the department to tread water, and that’s where Republicans are looking to find common ground.”