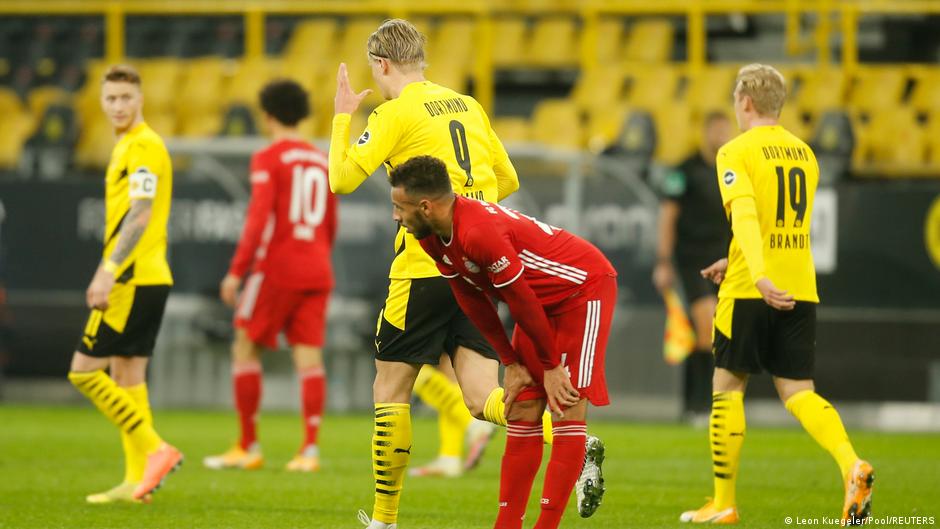 Roman Bürki: Made a few decent stops in both halves, but was helpless for all three of Bayern’s goal. 6

Manuel Akanji: Won a few physical challenges, but was also caught out with his positioning on a few occasions. 6

Mats Hummels: Nowhere near his best, perhaps due to a hamstring niggle. Stray passes, poor marking at times, and was beaten too easily by Lewandowski for the go-ahead goal. 5

Raphael Guerreiro: Was defensively strong and had a few dangerous forays forward. Set up both of Dortmund’s goals for Reus and Haaland. 8

Axel Witsel: Put in a decent shift, made a few vital interceptions and was largely safe in possession. 6

Thomas Delaney: Wasn’t particularly prominent in the middle of the park and lost some crucial tussles. 5

Marco Reus: A very quiet first half, which he made up for with a fantastic finish to open the scoring. But he squandered a great chance late on to tie the match. 6

Jadon Sancho: Never really got into the game. Slow and sluggish on the ball, sloppy in possession. Had his moments but largely went missing. 4

Erling Haaland: Was fantastic with the basics, holding the ball up well and making excellent off-the-ball runs. But his final product was missing tonight, despite a late strike. 6

Dortmund substitutes: No huge impact from any of Jude Bellingham, Julian Brandt, or Thorgan Hazard – which was probably the difference between the two sides. 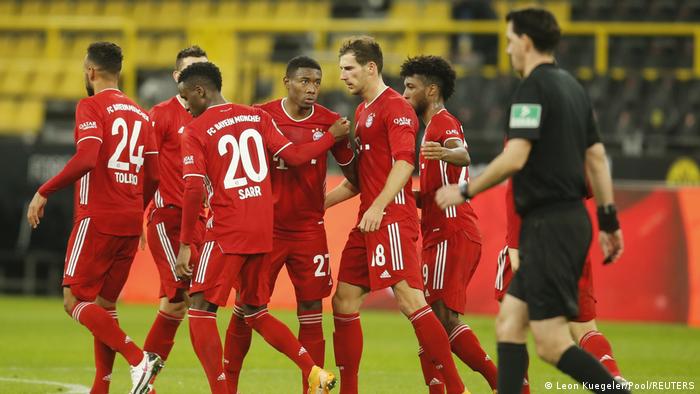 Manuel Neuer: Not a lot to do in the first half and pretty powerless to stop Reus’ goal. But made some solid saves in the second period. 6

Bouna Sarr: A fairly disappointing showing from the Frenchman. Was targeted at times by Dortmund and didn’t cope well. 5

Jerome Boateng: Struggled to deal with Haaland’s physicality and movement and was in no man’s land for Dortmund’s opener. Substituted early for Javi Martinez. 5

David Alaba: Also unconvincing in defense but scored a crucial free-kick to get Bayern back in the game. 7

Lucas Hernandez: Solid at the back, kept Sancho quiet, and was industrious going forward. His deliveries were fantastic, including the cross for Lewandowski’s header. 8

Joshua Kimmich: Had to go off injured in the 36th minute and never really got into the match. Perhaps lucky to have avoided a red card for a cynical tackle on Haaland that caused his injury. 5

Leon Goretzka: A solid match, without showing anything spectacular. 6

Serge Gnabry: Caused Dortmund a lot of problems on both wings. Denied an assist by the offside flag, but won the free-kick for Alaba’s equalizer. 8

Thomas Müller: Had a fairly quiet match, though worked his socks off and was often found covering in defense. 6

Kingsley Coman: Fantastic movement from both wings and a constant threat for Dortmund. Unlucky not to get on scoresheet after hitting the post. 7

Robert Lewandowski: A quiet first half outside his offside goal, but he popped up with a world-class winner. Unfortunate to finish with just one goal. 8

Bayern substitutes: Corentin Tolisso was solid in replacing Kimmich early in the match. Leroy Sane scored a fantastic, decisive goal, while Javi Martinez shored up the defense when replacing Boateng.