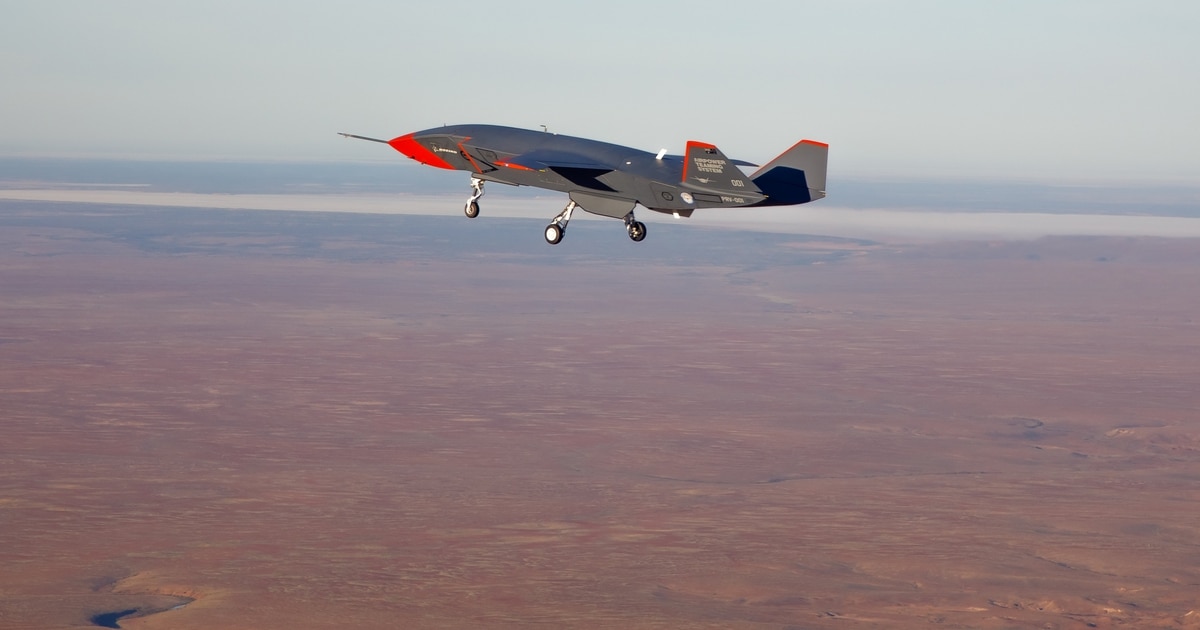 Following a series of ground tests to validate its navigation and pilot control systems, the first Loyal Wingman — which Boeing also calls the Airpower Teaming System — took flight from Woomera Range Complex in South Australia on Feb. 27, the company announced on Monday.

During the flight, the aircraft followed a preplanned route where the vehicle flew at different speeds and altitudes. The drone was monitored by a Boeing test pilot located onsite.

“Most of the interaction by the human is really in mission planning,” said Shane Arnott, Boeing’s ATS program director. “The test pilot was in the loop throughout. He gave commands at each phase, if you will —taxi, takeoff, return…it’s almost as simple as that.”

Eventually, the Loyal Wingman will be able to fly autonomously with manned fighter jets, and may even use artificial intelligence in order to respond to new information on the battlefield. However, for this first flight, testing the drone’s AI capabilities was not a major priority, Arnott said.

“The Loyal Wingman project is a pathfinder for the integration of autonomous systems and artificial intelligence to create smart human-machine teams,” she said. “Through this project we are learning how to integrate these new capabilities to complement and extend air combat and other missions.”

The Loyal Wingman air vehicle is 38 feet long and has a 24 foot wingspan, with a removable nose that can be packed with mission-specific sensors and other payloads. It can fly at a range in excess of 2,000 nautical miles.

The ATS is the “first military combat aircraft to be designed, engineered and manufactured in Australia in more than 50 years,” according to Boeing. More than 35 Australian companies, including BAE Systems Australia, RUAG Australia, AME Systems and Ferra Engineering, are involved in the production of the aircraft.

Boeing rolled out the first ATS system in May 2020, and has other aircraft in development. Arnott declined to talk about future tests of the system, as well as when the six systems would be delivered to the RAAF.

Soon the RAAF won’t be the only air force operating the system. The air vehicle also serve as the basis for Boeing’s entrant in the Skyborg program for the U.S. Air Force, said Jerad Hayes, Boeing’s senior director of autonomous aviation and technology.

“We’re leveraging a common core across all of the programs,” Hayes said. What’s different, he added, will be the specific mission equipment — items like communications gear and sensors.

Boeing has multiple payloads in development for different customers, said Arnott, who declined to give further details.

In December, the U.S. Air Force awarded Boeing, General Atomics and Kratos contracts to produce air vehicles for the Skyborg program , which seeks to create a low-cost, artificially intelligent, autonomous drone that can perform missions in contested environments alongside fighter aircraft.

At the time, Boeing received $25.7 million for a two-year period of performance. The Air Force has stated that first prototypes will be received from the vendors no later than May for initial flight experiments beginning in July.

Hayes declined to say whether the aircraft would be delivered by May, but said that “the aircraft will be available in time to support the milestone events as part of the Skyborg program.”