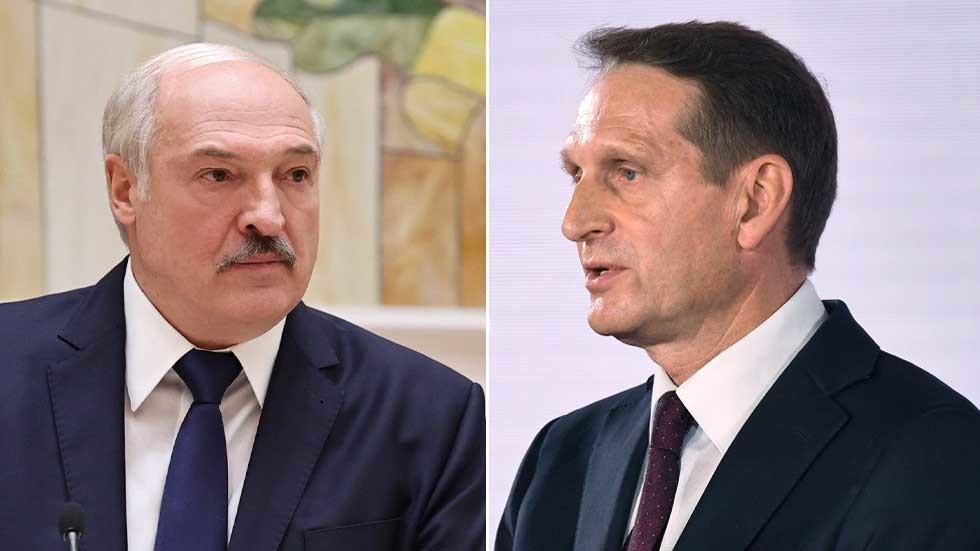 Russia’s top spy was forced to explain the gravity of mass protests in Belarus to its embattled President Alexander Lukashenko. The explosive claim comes from a foreign policy expert with close ties to Moscow’s diplomatic service.

The head of the Russian Foreign Intelligence Service (SVR), Sergey Naryshkin, was dispatched to Minsk for talks with President Lukashenko, in late October, as the rallies entered their third month. The unrest began in August after the opposition refused to accept the results of a presidential election which is widely believed to have been rigged.
Speaking to Russian news agency TASS on Tuesday, Vladimir Zharikhin, Deputy Director of the CIS Institute shed light on how Naryshkin allegedly urged Lukashenko to take the situation seriously.

Also on rt.com
Belarus on the brink? Unloved in Moscow, a pariah again in the West & facing protests at home, Lukashenko is running out of road

According to Zharikhin, Russian representatives haven’t shied away from criticising the Belarusian government’s response to the protests that have paralysed the country since the disputed presidential election in August. “Belarusian authorities made mistakes, and created this crisis situation with their own hands,” he added. “The statements that the Poles and the Lithuanians have invented it are unjust. There were serious problems, which Russian authorities have pointed out.”


Russia’s CIS Institute is an influential independent foreign policy think tank, focusing on the countries of the former Soviet Union. It enjoys close relations with senior diplomats and political leaders in Moscow, and Naryshkin himself has often been seen as an important bellwether of Russia’s foreign affairs thinking.

Russian Foreign Minister Sergey Lavrov also moved to distance his country from the decision to list Svetlana Tikhanovskaya on an international list of persons of interest, this week. Speaking to the Russia’s Kommersant newspaper on Tuesday, he said that “the move to put Tikhanovskaya on the wanted list was a solely judicial matter. It is about Russia’s obligations under the CIS treaty.”

Despite attempts at suppression, protests in Belarus are ongoing, with police making more than 200 arrests on Sunday, as well as allegedly using stun grenades and firing warning shots at protestors.