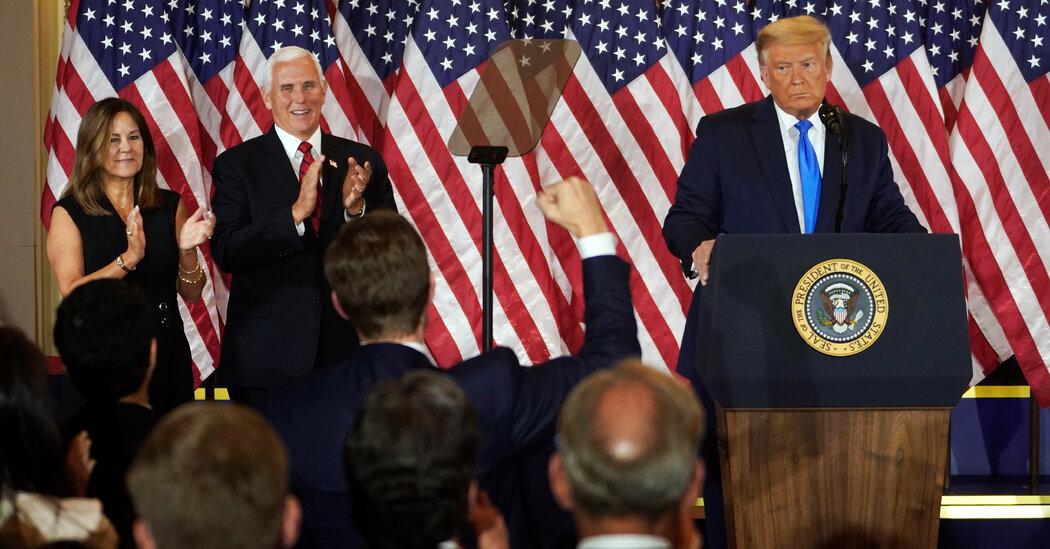 Mr. Trump did not have a clear upper hand, but the prolonged suspense was, at least at the start, something of a victory for the president, who was at risk of being eliminated from contention if one of the big, historically Republican states of the Southeast had defected to Mr. Biden. That was still a possibility in North Carolina or Georgia, where the vote tally was closely divided.

In Georgia, there appeared to be a large number of uncounted ballots in the Atlanta metro area, and those votes were expected to tilt solidly to Mr. Biden. And in a number of the state’s rural counties, Mr. Biden was slightly outperforming the margins posted by Stacey Abrams, a Democrat who lost a race for governor there two years ago by about 55,000 votes.

Vote-counting was moving relatively slowly in some battleground states on Tuesday night because of the scale of the turnout, a backlog of absentee ballots received by mail and scattered problems with processing the vote. And each state handled the counting and releasing of its ballots differently.

Ohio, for example, released the results of all of its mail ballots after the polls closed — making the state seem to tilt toward Mr. Biden until more Election Day votes were cast. Similarly, Michigan released its day-of votes in the first hours after polls closed, making it seem that Mr. Trump enjoyed a wide advantage in a hotly contested state.

Much of the uncertainty hanging over the election arose from the inconsistent or patchwork array of state-level policies hurriedly put in place to enable voting amid a public health disaster. In a number of states, like Pennsylvania and Michigan, local Republican officials blocked Democrats’ efforts to make it easier to count ballots cast before Election Day, raising the possibility of a drawn-out count in some of the most important battlegrounds — the very occurrence Mr. Trump protested Wednesday morning.

Democrats feared that in some cases a Supreme Court now dominated by conservative justices could ultimately limit vote-counting in a way that would aid Mr. Trump, a possibility the president raised in his remarks.

For all the angst about a potential breakdown in voting procedures in advance of Election Day, there were no prominent reports of technological failures or chaos at the polls, nor was there any evidence of significant civil unrest midway through the evening. There was still the potential for considerable uncertainty in the slower-counting states, but none of the numerous doomsday scenarios on the logistics of voting seemed to come to pass.

r/politics – Van Jones: The fact that it’s this close hurts