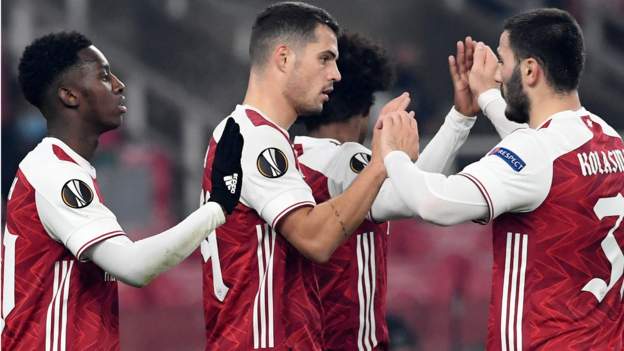 Mikel Arteta called for the introduction of the video assistant referee in Europa League group games despite Arsenal running out comfortable winners against Molde.

The Gunners reached the halfway point of Group B with a 100% winning record courtesy of a solid victory.

But it could have been more as Eddie Nketiah had what looked like a legal goal ruled out for offside after Nicolas Pepe’s pass, with Molde leading 1-0.

Unlike the Champions League, VAR is not being used in the group stages of the Europa League.

“I don’t think it makes any sense when we have the technology and we all believe it is the right call for everybody to do it,” said Arteta.

“So I don’t understand, we were complaining with the referee because we were told he was clearly onside and obviously it’s a situation that can clearly change the game.

“So I think it is something they have to look at and if possible change it.”

For the second time in three group games, the Gunners had to come from behind after Martin Ellingsen beat Bernd Leno from 25 yards following a superb pass by former Manchester United reserve player Magnus Wolff Eikrem.

After Nketiah’s disallowed goal, Arsenal equalised at the end of the first half.

Kristoffer Haugen put past his own keeper while trying to intercept Nketiah’s cross to Joe Willock before Sead Kolasinac blazed a great chance over the bar.

The Gunners took the lead when Molde substitute Sheriff Sinyan turned Willock’s pass across the six-yard area into his own net.

Substitute Bukayo Saka picked out Pepe to make it 3-1 before Willock scored a deserved late goal, as Arsenal went three points clear at the top of the group with three games remaining.

Willock and Nketiah shine for Gunners

Arsenal, with two games to spare, could secure a place in the last 32 of the competition with victory in the return fixture in Norway on 26 November.

Arteta has now seen his side win three successive games in all competitions since they were undone by Leicester’s counter-attack last month.

Despite falling behind, Arsenal were able to brush aside their opponents without the need to bring on Pierre-Emerick Aubameyang, Alexandre Lacazette or Thomas Partey.

Arteta was all smiles at the end, fist-bumping Willock on the pitch after the full-time whistle, the 21-year-old pushing his claims for a first Premier League start of the season with a performance full of hunger and desire.

“The way he is approaching every opportunity shows how mature he is,” said Arteta when asked about Willock’s contribution.

“I’m impressed with the way he is communicating as well. I think he is developing the right way, he is a player I really like.

“He has some very special qualities and he deserves every minute that he’s playing and he’s showing it with performances, with goals and his attitude.”

The Gunners had fallen behind after failing to close down Ellingsen, whose excellent strike had Molde dreaming of one of the greatest results in their history.

It was the wake-up call the hosts needed, Arteta’s side playing with a higher intensity after equalising.

Arsenal’s future looks in good hands, Nketiah also impressing with his speed and work-rate while substitute Saka played a highly-intelligent pass to pick out Pepe for his goal.

‘A nightmare case.’ Florida man thought he shot an intruder, but it was his pregnant wife, sheriff says