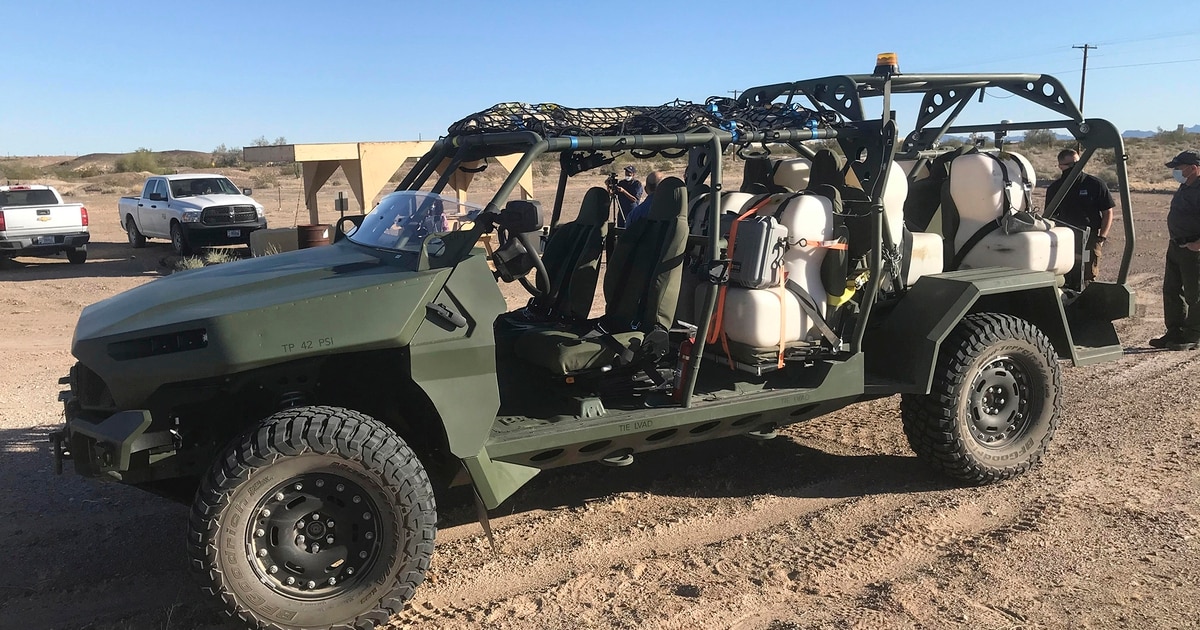 YUMA, Ariz. — A new vehicle that the U.S. Army is acquiring to provide infantry soldiers with battlefield mobility is being tested in the Yuma Proving Ground’s harsh desert terrain in southwestern Arizona.

Largely based on a midsize Chevrolet pickup, the Infantry Squad Vehicle is intended to carry an infantry squad’s nine soldiers and their equipment, the Yuma Sun reported.

“Before the soldier ever touches the vehicle, we want to make sure that it is safe for them to use,” Rodriguez told the Yuma Sun.

Along with operating one of nine prototypes over 5,000 miles (8,047 kilometers) of desert terrain at the proving ground, “we will also be doing some slope mobility and cooling system tests,” he said.

The vehicle will be built under a $214.3 million contract awarded to a subsidiary, GM Defense LLC, in June. The company said in December it was renovating a facility in Concord, North Carolina, to support production of the vehicle.

The facility is expected to begin delivering production vehicles in April.

Sign up for the Army Times Daily News Roundup

By giving us your email, you are opting in to the Army Times Daily News Roundup.

The Army plans to furnish the vehicles to infantry brigade combat teams that now don’t have vehicles for transporting their frontline foot soldiers.

Having soldiers ride in a vehicle with their equipment instead of carrying it across many miles of cross-country terrain to their destination means they’ll be much less fatigued and better able to carry out their missions, said Steven Herrick, the Army’s product lead for ground mobility vehicles within the Program Executive Office Combat Support and Combat Service Support.

“It has always been coined as a better boot,” Herrick said. “It is a mode of transportation that effectively changes the game on how soldiers deploy and get to their objectives.”

The unarmored vehicle will be light enough to be sling loaded under a UH-60 Black Hawk helicopter and small enough to fit inside a CH-47 Chinook helicopter.

A cargo plane could also deliver the vehicle with a low-altitude airdrop.

A Pentagon assessment said the vehicle will provide infantry soldiers with valuable off-road mobility and “to be less predictable in their movement” but is cramped and lacks convenient storage space for a squad’s nine soldiers and their equipment. The assessment by the Defense Department’s test and evaluation office was first reported by the Task & Purpose military news website.

The vehicle is based on the frame of the 2020 Chevrolet Colorado ZR2 midsize truck, and Herrick said 90 percent of its parts are commercial off-the-shelf components.

The initial contract is for production of 649 vehicles by the end of the 2024 fiscal year, but the Army plans a total of 2,065.

The 1st Infantry Brigade Combat Team of the 82nd Airborne Division at Fort Bragg, North Carolina — which specializes in parachute assault operations — is slated to receive the first 59 vehicles later this year.

Eventually, 11 infantry brigade combat teams will be outfitted with 59 vehicles each under the first contract.

Verizon support is now advising its users on Twitter to "turn on LTE", which would turn off 5G, to preserve battery life (Kim Lyons/The Verge)