Anthony Edwards Drafted No. 1 by the Minnesota Timberwolves 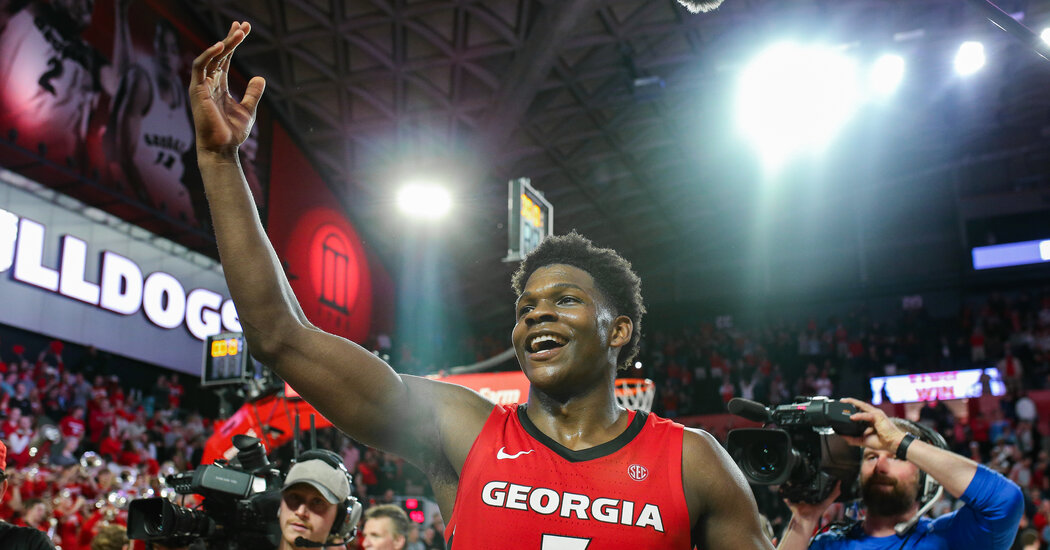 With the eighth pick, the Knicks selected Obi Toppin from Dayton. A 6-foot-9 forward, Toppin won virtually every national player of the year award after averaging 20 points and 7.5 rebounds per game while shooting 63.3 percent from the field as a sophomore. Toppin grew up in Brooklyn and attended Ossining High School in Westchester County.

“Me repping my city, it’s amazing,” Toppin said through tears in a televised interview. “A lot of people pray to be in this position, and I’m not going to take it for granted.”

The Nets, who are gearing up for the debut of their superstar tandem, Kevin Durant and Kyrie Irving, got some help along the perimeter by acquiring guard Landry Shamet from the Los Angeles Clippers in a three-way trade with the Pistons, according to a person with knowledge of the deal who was not authorized to discuss it publicly. The Nets gave up the No. 19 pick as a part of the deal, and Luke Kennard was sent to the Clippers from the Pistons.

The Philadelphia 76ers added some shooting skill, too, by acquiring Seth Curry from the Dallas Mavericks in exchange for Josh Richardson and a second-round pick, according to a person with knowledge of the trade who was not authorized to discuss it publicly.

In other notable picks, the Washington Wizards selected Deni Avdija, a forward from Israel, at No. 9. Cole Anthony, a point guard from North Carolina and the son of the former N.B.A. player Greg Anthony, was selected 15th by the Orlando Magic. And Kenyon Martin Jr., whose father also starred in the league, was drafted late in the second round by the Sacramento Kings.

Before the pandemic wrought havoc on the league calendar, the draft had been scheduled for June 25 at Barclays Center in Brooklyn.

Before it was finally staged, the draft was preceded by a flurry of trade activity.

On Wednesday morning, the Knicks worked their way up the draft order by sending picks No. 27 and 38 to the Utah Jazz in exchange for the No. 23 pick and the rights to Ante Tomic, a 33-year-old center who has spent his entire pro career overseas. They wound up trading that pick for two others: Nos. 25 and 33, a nifty maneuver for their new front office. The Knicks ultimately selected Immanuel Quickley, a shooting guard from Kentucky, at No. 25.