Another littoral combat ship breaks down on deployment 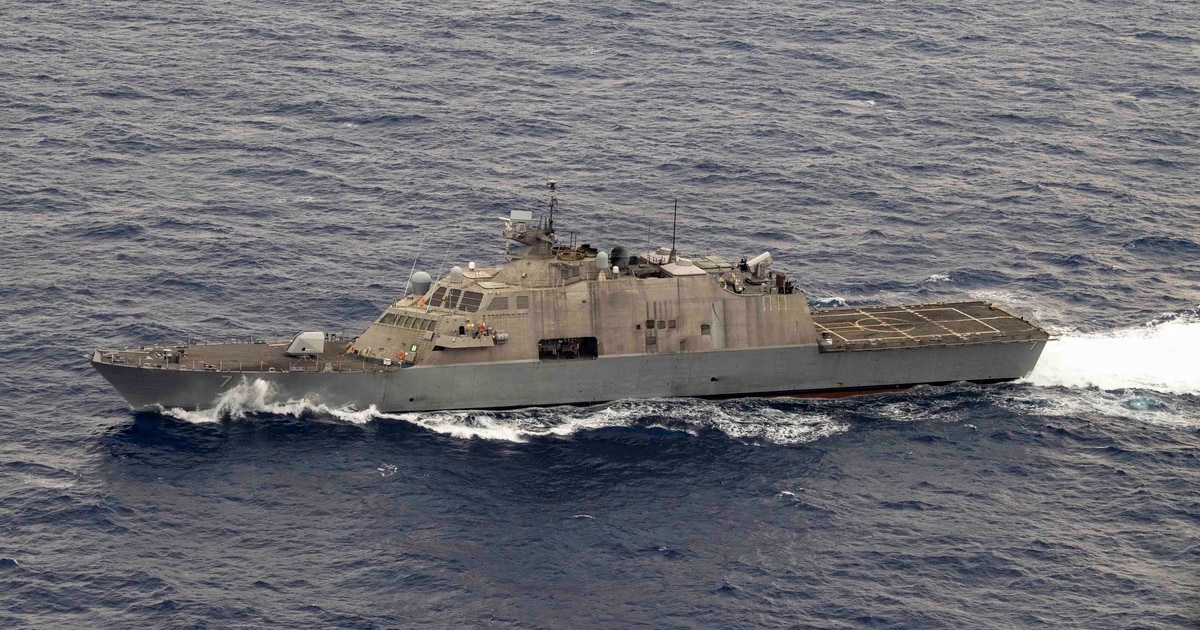 WASHINGTON – The littoral combat ship Detroit is limping back to Mayport, Florida from a deployment to South America in a move that marks the latest setback for the Freedom variant’s complicated propulsion system.

Three sources familiar with the situation told Defense News the casualty is in Detroit’s combining gear, which is a complex transmission that connects power from two large gas turbine engines and two main propulsion diesel engines to the ship’s propulsion shafts, which propels the ship through the water with water jets.

“USS Detroit (LCS 7) experienced an engineering casualty during routine operations, and a technical evaluation determined that in-port repairs would be required,” the statement read. “USS Detroit has been a vital and productive asset and will be redeployed as soon as possible.”

The Freedom-class LCS has been bedeviled by issues with its combining gear, which is an imperfect solution engineered to meet the 40-knot-plus speed requirement. The ship can make between 10 and 12 knots with just its diesel engines, but to go any faster it must engage the gas turbine engines. The combining gear fuses and transmits the power to the propulsion shafts, but is a system with a lot of moving parts and has proven unreliable.

The string of combining gear casualties dating back to at least late 2015, when the LCS Milwaukee broke down on its maiden voyage to its home port in Mayport, Florida, and had to be towed into Little Creek amphibious base in Hampton Roads, Virginia. Early the next year, the littoral combat ship Fort Worth suffered a casualty to the combining gear in port when sailors accidentally ran the system without lube oil running through it.

Several sources familiar with the issue who spoke to Defense News said the Freedom variant’s propulsion train has proven generally unreliable when the combining gear needs to be engaged.

The Navy also backed off a three-crew system where three crews would rotate between two hulls to maximize how much time each ship could spend underway. But the ships have not proven reliable enough to support such a system. Operating unreliable ships prone to needing emergent repairs will put an increasing burden on already strained surface ship maintenance budgets and, depending on how extensive the repairs, ship repair facilities.

The reliability issues should force the Navy into significant changes in how it deploys the ships, said Bryan Clark, a retired submarine officer and senior fellow at the Hudson Institute.

“You have to fall back and do essentially what the Navy has done, and say, ‘We’re going to do sub-frigate missions,’” Clark said. Part of that may mean that ships that were designed to go fast will need to travel below 16 knots all the time so as not to incur damage to a fragile propulsion train.

It also means that the Navy will have to make a decision about whether it wants to spend the money on systems that are being designed for the hulls, such as the mine warfare and anti-submarine mission modules, which are both years late.

‘We need to get on with it’

The issues with LCS reliability are not lost on the Navy’s senior leaders.

In a July interview with Defense News, Chief of Naval Operations Adm. Michael Gilday said he was committed to addressing the reliability issues with the platform.

“There are things in the near term that I have to deliver, that I’m putting heat on now, and one of them is LCS,” Gilday said. “One part is sustainability and reliability. We know enough about that platform and the problems that we have that plague us with regard to reliability and sustainability, and I need them resolved.

“That requires a campaign plan to get after it and have it reviewed by me frequently enough so that I can be sighted on it. Those platforms have been around since 2008 — we need to get on with it. We’ve done five deployments since I’ve been on the job, we’re going to ramp that up two-and-a-half times over the next couple of years, but we have got to get after it,” he added. “LCS for me is something, on my watch, I’ve got to get right.”

The Navy has already begun to try some new approaches to boosting reliability, said Gabrielson, the Fourth Fleet commander. The Navy deployed the expeditionary fast transport ship Burlington, operated by Military Sealift Command, along with the Gabriel Giffords, Sioux City and, until lately, the Detroit to act as a kind of tender for the ships to conduct repairs and maintenance as needed.

“USNS Burlington (T-EPF-10) is deployed to test her utility as an afloat staging base supporting the Planned Maintenance Availabilities (PMAV) for deployed LCS ships, showing real promise,” his statement said.

As for operations in Latin America, the show will go on without Detroit until it is able to return, Gabrielson said, with the annual “Unity in the Americas” exercise preparing to kick off.

“Both Gabrielle Giffords and Burlington will participate in the upcoming UNITAS exercise hosted by Ecuador, joined by 8 other partner nations contributing 10 ships, along with U.S. Marines, naval aircraft, as well as U.S. Air Force aircraft, a U.S. Coast Guard Cutter, and a U.S. Army ship, building and exercising regional maritime readiness,” the statement reads.

For Gilday, the continued reliability issues on LCS are a lesson the Navy needs to learn as it pushes forward with new classes of ships and unmanned surface vessels as part of a push to grow the Navy, he told Defense News.

“I go back to: Do I really need a littoral combat ship to go 40 knots?” Gilday mused. “That’s going to drive the entire design of the ship, not just the engineering plant but how it’s built. That becomes a critical factor. So if you take your eye off the ball with respect to requirements, you can find yourself drifting.”

Sen. Jack Reed is a quiet professional. If Democrats win the Senate, he’ll be front and center.

There’s a new world’s longest flight — with a catch