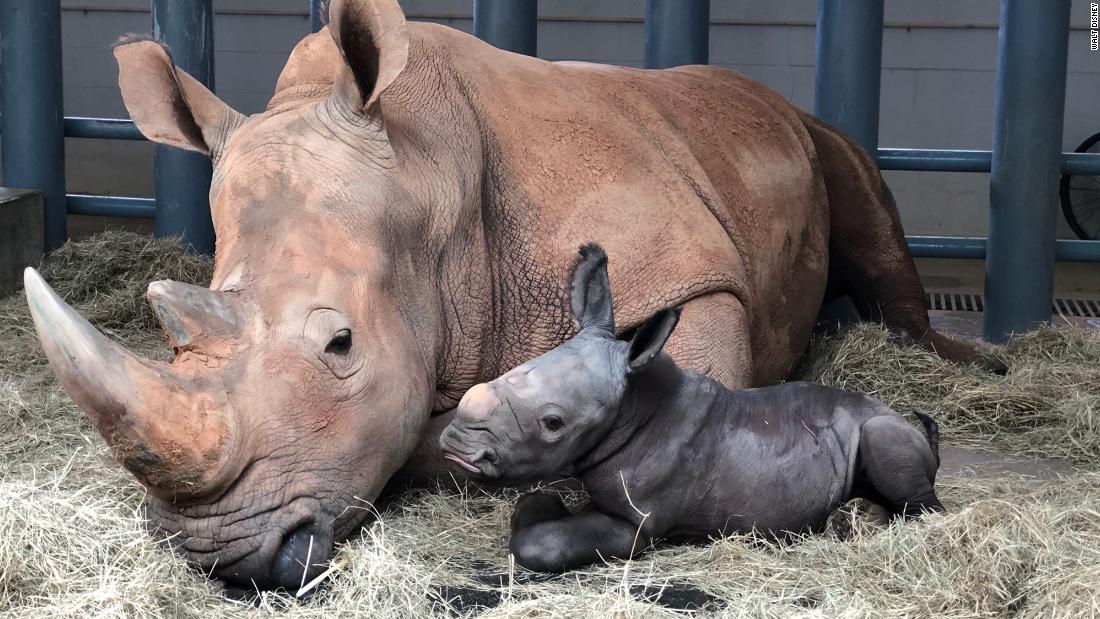 38
Share
Kendi, the first rhino born at the park, in 1999, was pregnant for 16 months before giving birth to a male calf, the park announced on October 25.
The adorable baby, who doesn’t have a name yet, is the 11th white rhino born at Walt Disney World Resort in Orlando, according to a news release from Walt Disney.

“Calf and mother are doing well under the keepers’ watchful eyes,” the park said in the release. “While rhinos are gregarious by nature; for now, the calf is resting, nursing and bonding with his mom.”

The rhino will join the “crash,” or group of rhinos, at the theme park’s savannah, where visitors can see the calf in its habitat while aboard the park’s Kilimanjaro Safaris attraction, the park said.

Kendi and Dugan, the father of the baby, were paired through a Species Survival Plan led by the Association of Zoos and Aquariums, which oversee the “responsible breeding of endangered species,” according to the release.

Both subspecies of white rhinos — the northern and southern white rhino — face detrimental risks that threaten their populations.

Rhinos are targeted by poachers, fueled by the belief in Asia that their horns cure various ailments. Experts say the rhino horn is becoming more lucrative than drugs.
White rhinos also lose their habitat due to agriculture and settlements, posing an increased risk to their population, according to the World Wildlife Fund.
The last two northern white rhinos left worldwide — Fatu and Najin — are both female and living at the Ol Pejeta Conservancy in Kenya. The last male, Sudan, died in 2018, raising fears the subspecies is on the verge of extinction.
The southern white rhino has been to the brink of extinction and back, but even as it continues to be under threat from poachers, it’s survival is largely thanks to the conservation work of the Hluhluwe Imfolozi Park, HiP, in KwaZulu-Natal, South Africa.

In the late 19th century, game hunting had forced the southern white rhino to the brink of extinction. By 2011, the subspecies had increased to over 17,000 from less than 50, thanks to the work of HiP and other conservation groups.