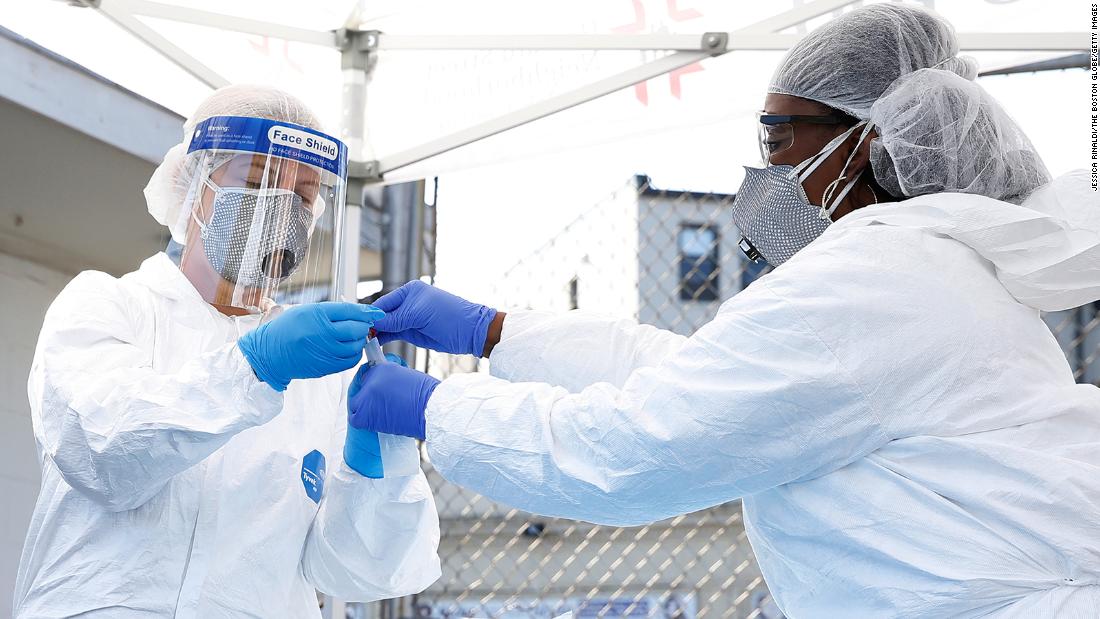 And when hospitalizations climb, deaths are likely to follow, doctors have warned.

More than 231,500 people have died in the US and researchers from the University of Washington’s Institute for Health Metrics and Evaluation project a total of about 399,163 American lives lost by February 1.

The numbers will likely get worse before they get better and officials worry the upcoming holidays — and the gatherings that will come with them — will further fuel an already rampant spread into the winter months. But it doesn’t have to be this way. Public health measures touted by experts for months — including face masks, social distancing and regular hand washing — can help hold the virus down.

At least 36 states are reporting more new cases than the previous week while only five — Alabama, Hawaii, Louisiana, Oklahoma and Tennessee — are reporting a decline, according to data from Johns Hopkins University.

Working to combat the pandemic’s grip, some state leaders have pushed new measures in hopes of slowing the spread of the virus.

In Connecticut, Gov. Ned Lamont announced new guidelines including limiting restaurants to 50% capacity, with no more than eight people at a table and limiting indoor event spaces and theaters, among other restrictions. Lamont also recommended residents stay home between 10 p.m. and 5 a.m., a move he said would help limit socializing.

Massachusetts Gov. Charlie Baker on Monday announced a Stay-At-Home advisory, which will be in effect from 10 p.m. to 5 a.m. All gatherings — limited to 10 people in homes indoors and 25 people outside — need to end by 9:30 p.m., he said. Everyone over the age of 5 will also be required to wear a face covering in public.

Meanwhile in West Virginia, the governor sounded the alarm on the state’s infection rate and the resources stretched thin.

“When it boils right down to it, what I have done now I’ve taken an even more drastic step in trying to provide testing and our National Guard, local health departments are now being tested beyond belief and being stretched beyond belief,” Gov. Jim Justice said.

Justice pointed to pandemic fatigue — what many other officials say is contributing to Covid-19 spread — as a major reason why the virus is running rampant in the state.

CDC: People who have Covid-19 or who were exposed can go vote

For those who are hoping to cast their ballot Tuesday, the US Centers for Disease Control and Prevention told CNN people recovering from Covid-19 or quarantining from being exposed to the virus can go vote — safely.

“In-person voting can be carried out safely following CDC’s recommendations for polling location and voters,” a CDC spokesperson wrote in a Monday email.

Voters who are sick or in quarantine should let poll workers know when arriving at the poling location and also take the following steps.

Poll workers who are assisting voters with symptoms should be provided with personal protective equipment and trained on how to use it properly.

“When possible, alternative voting options — which minimize contact between voters and poll workers — should be made available for people with Covid-19, those who have symptoms of Covid-19, and those who have been exposed,” the spokesperson said.

Read more on how to vote safely here

Covid-19 case counts across the US are impacting children at “unprecedented levels,” according to numbers released Monday by the American Academy of Pediatrics and the Children’s Hospital Association, which track data reported by state health departments.

There were 61,000 new cases in children during the last week of October, “which is larger than any previous week in the pandemic,” the AAP said in a statement.

And since the start of the pandemic through October 29, more than 853,000 children have tested positive for the virus, the AAP said. Nearly 200,000 of those cases were during the month of October.

That number is likely an undercount as symptoms in children can often be mild and look like common colds or viruses and many children go untested.