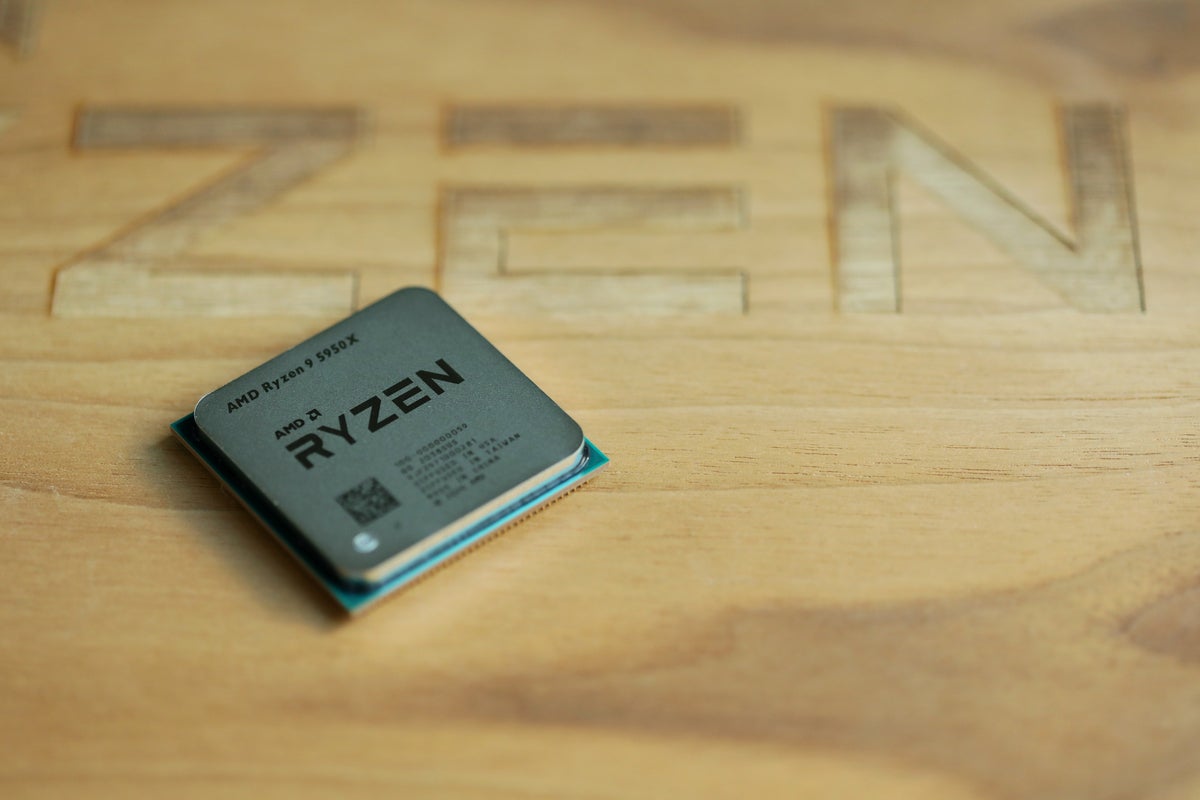 Many will see today as an historic shift in computing power. With its new Ryzen 5000 desktop CPUs, AMD has finally knocked Intel to the floor, and is raising its boxing gloves in victory as the flash bulbs pop and the ref declares a winner. The headline takeaway: Ryzen 9 5900X and Ryzen 9 5950X have trounced Intel’s Core i9.

The $800 Ryzen 9 5950Xand $550 Ryzen 9 5900Xhave so utterly destroyed Core i9 that we’re still stunned by the severity of the sweep. But at the same time, we really shouldn’t be surprised, as this has been building ever since AMD first showed off its Zen core in Aug. 2016—just across the street from where Intel was ironically wrapping up its 20th and final Intel Developer Forum.

There’s a lot to unpack with these new CPUs, but we understand if you want to skip to “the good stuff.” So read on if you want to hear about AMD’s path to glory over the past few years, or feel free to jump ahead to these upcoming sections:

Before Ryzen. After Ryzen.

You can see just how disruptive Ryzen has been by looking at the table below, which summarizes the last five years of consumer desktop computing history. At the top you can see the calm, blue waters of Intel, whose only competition was itself, testing the limits of just how much it could charge a consumer for a CPU (Hint: it was $1,723).

The first red entry, AMD’s original Ryzen processor, would upend it all by offering an 8-core CPU for less than half of what Intel had been charging the year before.

From there it’s just been one duck and weave after another. As Intel’s chip architecture languished at 14 nanometers, AMD has literally danced around its rival’s aging body in the ring. AMD goosed its process, slightly improved its performance, and then cut prices even further with its Ryzen 7 2700X.

With Ryzen 9 3950X, AMD shocked the world with a consumer CPU packing 16 cores on a 7nm process at a reasonable price. While we don’t show it—the Intel equivalent—the Core i9-9960X was slower and cost $1,600.

You can see that with every iteration of Zen and Ryzen, AMD has backed Intel into a corner. The last few reasons to consider Intel desktop chips were narrow, but they were real: single-threaded performance and gaming performance.

With Ryzen 5000 and Zen 3, AMD lands the final knock-out punch, where you can see the sweat and spittle flying off Core’s face in slow motion.

With Ryzen 5000, AMD says it initiated a near-ground-up redesign of the core, with three goals: performance, latency, and power efficiency.

For the cores themselves, AMD improved integer performance, floating point performance, and branch prediction. Latency, however, received one of the biggest upgrades, with a redesign of the core complex (CCX), the basic building block of the chip.

Unlike Intel which fashions its CPUs from a monolithic piece of silicon, AMD assembles Ryzen from multiple “chiplets.” This gives AMD far more flexibility in yields and construction. Zen 3, for example, uses the same IO die that contains the PCIe 4.0 lanes and memory controller as Zen 2. This let AMD get its newest cores into existing sockets and motherboards without disturbing everything underneath it.

With previous Ryzen chips, each CCX was constructed of four x86 cores, which were connected to a second CCX to make a core chiplet die (CCD). This design lead to a latency cost when the cores had to communicate outside of the 4-core CCX. AMD said it has measured this latency in a range from 78ns to 95ns. With the unified 8-core CCX, the latency is essentially eliminated.

Another benefit of the new unified 8-core CCX is more available L3 cache. The previous design gave each 4-core CCX 16MB of L3 cache, but it couldn’t be shared. By combining all of the cores into one CCX, all eight now share 32MB of space.

This savings in latency and increase in cache size is what AMD credits for much of its huge gains in gaming. In fact, AMD engineers said the impact of the large L3 on today’s games was “eye-opening.”

The new Zen 3 cores also feature more aggressive clock gating that can put a core to sleep when not in use. The clock gating helps increase boost clocks of the Ryzen 5000 and also saves power. AMD said a sleeping core uses no power and generates no heat, which contributes to Ryzen 5000’s performance and power efficiency.

The chip is so efficient, AMD said, it has recorded a 2.8X improvement over an Intel Core i9-10900K, as well as massive performance gains over the previous 7nm Ryzen 3000 CPUs, without drawing any additional power. While AMD doesn’t say, we’d guess this would also contribute a lot to a laptop version of the chip.

The latency improvements and the power savings all promote the final goal: Performance. AMD said its goal was an astounding 20 percent improvement in instructions per clock (IPC) which it looks like it has largely achieved.

Ryzen 5000 Performance: How We Tested

Mature System Builders strongly cautioned. Some benchmark results may seem inappropriately lopsided for nerds under 13 (pre-teen ages) who have never witnessed a benchmark battle this decisive.

The AMD CPUs were tested in an MSI MEG X570 Godlike motherboard, while the Intel CPU was installed in an Asus Maximus XII Extreme board.

All four CPUs were tested with the newly-released Windows 10 2H20 version, as well as matching GeForce RTX 2080 Ti GPUs with the latest public driver. Both machines were outfitted with identical 32GB of Corsair DDR4/3600 RAM in dual-channel mode, with their XMP profiles loaded.

For cooling, we used NZXT X62 280mm liquid coolers, with fans and pumps manually set to their maximum speed. Both were built in cases with the case doors off, and small exterior desktop fans blowing air over the motherboard and graphics card.

Storage on the AMD systems used a Corsair MP600 PCIe 4.0 SSD, while the Intel system used a Samsung 960 Pro SSD. In a way, this gives the AMD CPUs an advantage due to PCIe 4.0. On the other hand, AMD is only vendor to offer PCIe 4.0 on a desktop chip today, so it feels unfair to handcuff it to PCI 3.0.

To ensure the results are fair, the vast majority of our tests were retested. For a few tests where the OS, graphics driver are unlikely to move the needle that much, we reused results and noted them as such.

We’ll kick this off where we usually do, with Maxon’s Cinebench R20. This is a 3D modelling test based on the same engine Maxon uses in its Cinema4D application. Besides being a professional application in use every day, it’s also the same 3D modelling engine that’s embedded in several Adobe Creative Cloud apps, such as After Effects and Premiere. Like most 3D modelling apps, it favors more threads and scales with the increase in CPU cores very efficiently.

For this test, we mix in results from previous reviews. As Cinebench R20 is nearly a pure CPU test, the results don’t move much even with OS, driver or BIOS updates. In the chart, the red represents the two new Zen 3-based Ryzen 5000 chips, the green represents Zen 2-based Ryzen 3000 chips, and the blue represents various Intel chips.

As a CPU test, Cinebench R20 performance increases with more CPU cores, but holding higher clock speeds matters, as does the actual efficiency of the cores.

On top is the new Ryzen 9 5950X with 16 cores, which offers an impressive 14-percent increase in performance over the 16-core Ryzen 9 3950X chip. While 14 percent is an incredible bump, AMD said much of the limitation on all-core loads is due to the CPU socket power limit. The small-socket AM4 can’t push the same power like a big-socket Threadripper TRX40 socket.

But no one really cares about red-on-red performance—nerds only want to see red-on-blue. There, it’s the total knockout you expected. With Intel stuck in the mud at 14nm, the best it can field in a smaller consumer socket is 10 cores in the Core i9-10900K. The rightfully “more expensive” Ryzen 9 5950X justifies itself with 63 percent more performance. More in its price range, the Ryzen 9 5900X outruns the 10-core Core i9 by 36 percent.

One thing to keep in mind is Cinebench R20 uses AVX as well as AVX512. On Intel’s older 14nm chips, using AVX or AVX512 increases the thermal load, so Intel intentionally lowers the clock speed to manage the heat. Not all rendering engines use these advanced instructions. The Chaos Group’s Corona renderer (at least not in the current benchmark version), for example, doesn’t use AVX or AVX512, so you can see the performance of the Intel chips when they don’t have to shift down.

Next up: Multi-core testing using V-Ray Next, and more.

Verizon support is now advising its users on Twitter to "turn on LTE",…

Modi's government is abetting a vicious campaign against Indian climate…