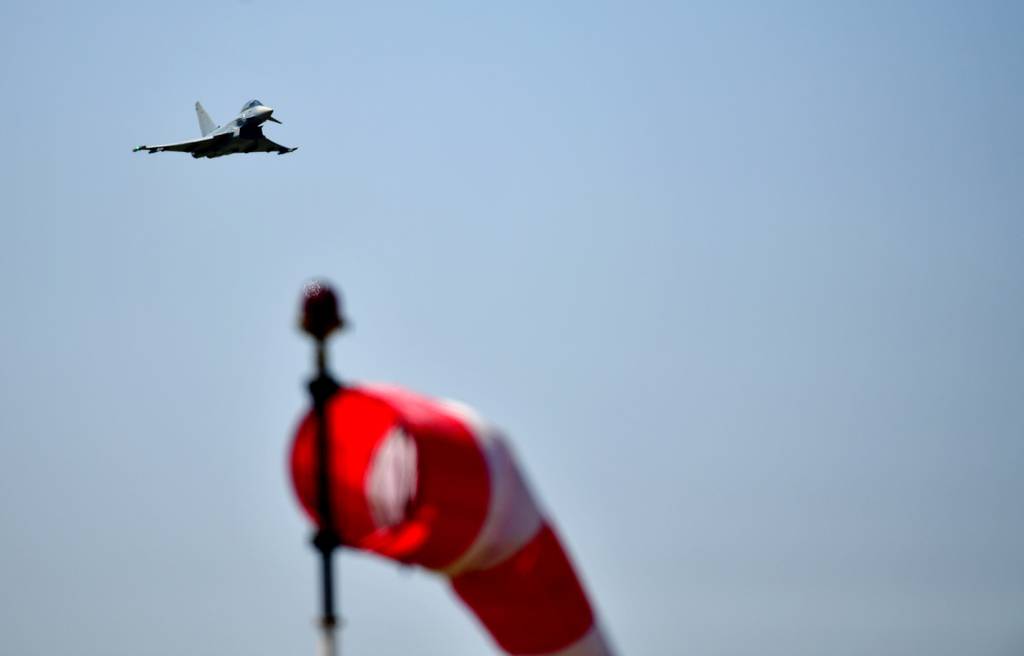 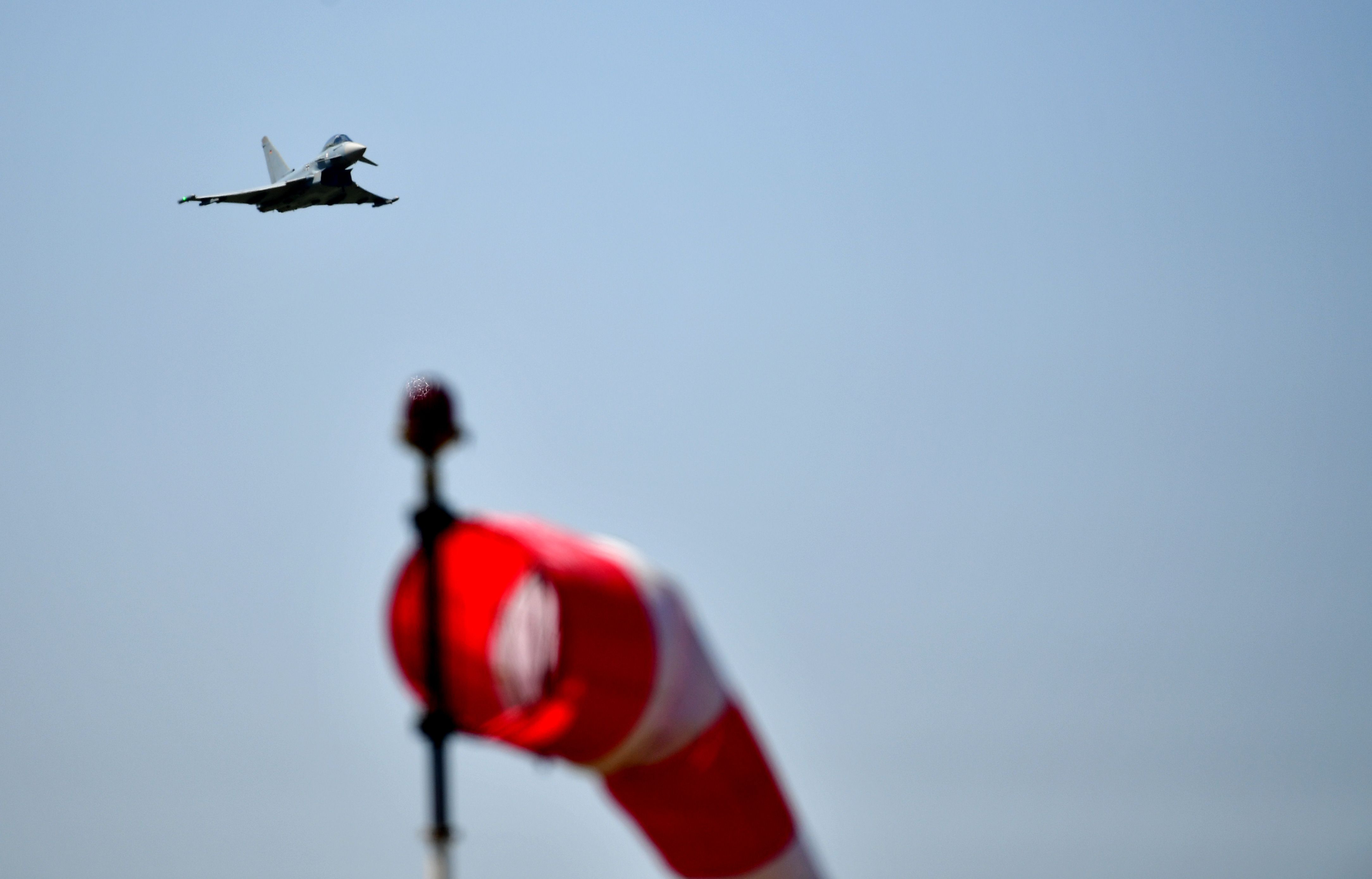 STUTTGART, Germany — Despite growing competition in its backyard, Airbus is laser-focused on keeping its military aircraft in Europe’s skies — and hoping to soon make it across the Atlantic.

Looking to 2022 and beyond, the European aerospace company has lofty ambitions to expand its Eurofighter fleets, while planning upgrades that will turn the Typhoon into a fifth-generation fighter jet, and lead directly into the tri-national Future Combat Air System (FCAS) program, officials shared in a Nov. 30 media briefing.

Meanwhile, on the military-transport side of the business, Airbus sees itself as a natural fit for Europe’s next-generation strategic lift efforts, and will submit an “Americanized” version of the A330 MRTT to the U.S. Air Force alongside Lockheed Martin.

Company officials had bullish news to share at the annual trade media briefing, held virtually for the second year in a row due to COVID-19. In late summer, A400M and A330 MRTT military transport aircraft demonstrated their capabilities when NATO members pulled thousands of refugees and personnel out of Kabul, following the withdrawal of coalition troops from Afghanistan. For Airbus Defence and Space CEO Michael Schoellhorn this mission was a “turning point in terms of the reputation” of the two aircraft, which have been hampered by availability problems.

Meanwhile, several Eurofighter fleets will be upgraded to Tranche-4 capabilities in the next several years, and the complex Franco-German-Spanish FCAS program — led by Airbus, Dassault, and Indra Systems — will soon enter its latest phase of development. The newest Eurofighter aircraft will serve as a logical “bridge” to the FCAS next-generation fighter aircraft, scheduled to enter service by 2040, officials argued.

But the company also took a heavy loss when Switzerland announced in June it would buy the Lockheed Martin-made F-35 Joint Strike Fighter, in a competition that included the Eurofighter Typhoon, Dassault’s Rafale and Boeing’s F/A-18 Super Hornet. Moreover, the F-35 periodically pops up as a potential replacement candidate for Spain’s aging F-18 Hornets, against the Typhoon, though the Spanish defense ministry recently said it has no such plans. And on FCAS, the three industry partners have yet to settle on a formal agreement that would launch the program’s upcoming demonstrator phase.

Looking at 2022 and beyond, Airbus needs to stay at the “cutting edge of what technology can provide to our partners, to our armed forces, to our customers,” said Schoellhorn, who took over for former Defence and Space CEO Dirk Hoke this past July.

The Spanish government continues to deliberate which aircraft will ultimately replace its aging F-18 fleet. Officials previously said that the Eurofighter Typhoon and Lockheed Martin’s F-35 are both being considered.

Spain does expect to procure the Eurofighter to replace its 20 oldest Hornets, based in the Canary Islands. But the decision for the wider F-18 fleet remains to be solidified, officials told Defense News last month at the biennial FEINDEF trade show in Madrid. After the show, Reuters reported that the F-35 was ruled out due to budget issues, quoting a Spanish defense spokesperson.

“The F-35 is an available aircraft,” he said during the media briefing. “It would be a surprise if Spain would not have discussed it.”

The company is ready to deliver new Eurofighters “as fast as possible” should Spain officially select the jet for the so-called HALCON program, Rossner said.

In a few years, the aircraft will receive major upgrades under the ongoing Long-Term Evolution (LTE) contract, which is planned to include a new E-scan radar, boosted computing power and aerodynamic capabilities, and manned-unmanned teaming features via a new cockpit and helmet design, Rossner said.

“LTE is a retrofit program for existing fleets, and hopefully also a new-build aircraft,” he noted, adding that these reforms will enable Eurofighter customers like Germany, Spain, Italy and the United Kingdom, to continue flying the aircraft through 2060.

The path to FCAS

The Tranche-4 Typhoons and LTE upgrades are planned to fit seamlessly into the eventual FCAS system-of-systems architecture, which will include a sixth-generation fighter jet outfitted with a new engine and weapon systems, “loyal wingman”-type unmanned aerial systems, an advanced combat cloud network, and cutting-edge sensors and stealth technologies.

The FCAS team has completed the two-year Joint Concept Study phase, and “are about to successfully close on the … Phase 1B,” Schoellhorn said. The German, Spanish, and French air forces have mutually agreed on key operating requirements, and the respective governments last summer each signed off on funding the next phase of development.

While much remains to be accomplished on the FCAS program in the short term, several European air force officials have also recently addressed its long-term potential. In 2021, both the Italian and German air force chiefs of staff expressed a desire for the Franco-German-Spanish FCAS program to eventually merge with a similar effort in development by the United Kingdom, Italy, and Sweden, known as Tempest.

Such a decision would be a political one decided by the states in question, Schoellhorn noted, but added that “conventional wisdom would say in the end, it will be difficult to have room for two such large programs in Europe.”

If the two programs were to merge, the industry partners should be able to come together easily, especially considering many of them already partner together on Eurofighter, he added. “I don’t think that would be the thing that would hold it up, to be very honest.”

“Of course, when you get more players around the table, you have the question of industrial return,” he continued. “But so far, we’ve always demonstrated we find win-win situations.”

Meanwhile, Airbus is still “in exchanges” with Dassault regarding the next-generation fighter jet component of FCAS, Schoellhorn acknowledged.

“It is a complex coming together of two successful companies with a very big importance for the decades to come,” he said. “So we all have agreed [that] we need to give the due diligence and invest the time that it takes to really come to the conclusions that we need.”

On the airlift side, the European Defense Agency (EDA) recently announced a new slate of 14 projects under the Permanent Structured Cooperation (PESCO) framework. One of those, dubbed “Strategic Air Transport for Outsized Cargo,” involves the development of a common aircraft fleet for long-haul cargo flights. It includes Germany, the Czech Republic, France, the Netherlands and Slovenia as initial members, but is also open for “possible third-state participation.”

While the effort was not discussed at Airbus’ trade media briefing Tuesday, a spokesperson confirmed via email that the company plans to be involved.

“Airbus, as European leader in military transport aircraft, will be an essential candidate in this European project related to strategic airlift,” the spokesperson said Thursday.

Eyes across the pond

While Europe remains Airbus’ main hub, the company is ready for a rematch against the Boeing KC-46 in the U.S. Air Force’s “KC-Y” bridge tanker competition. Airbus partnered with Lockheed Martin to pitch the LMXT, an “Americanized” variant of the A330 MRTT, for consideration in the KC-Y program. Under the contract, the winning bid could include up to 160 new aircraft to help bridge the gap between the ongoing KC-46 contract — which is limited to 13 production lots — and the next tanker recapitalization phase.

Airbus previously submitted the A330 MRTT for the KC-X program, which the Air Force awarded to Boeing in 2010 and which led to the development of the KC-46A Pegasus. The service expects to release the final request for proposals for the KC-Y program by the end of 2022.