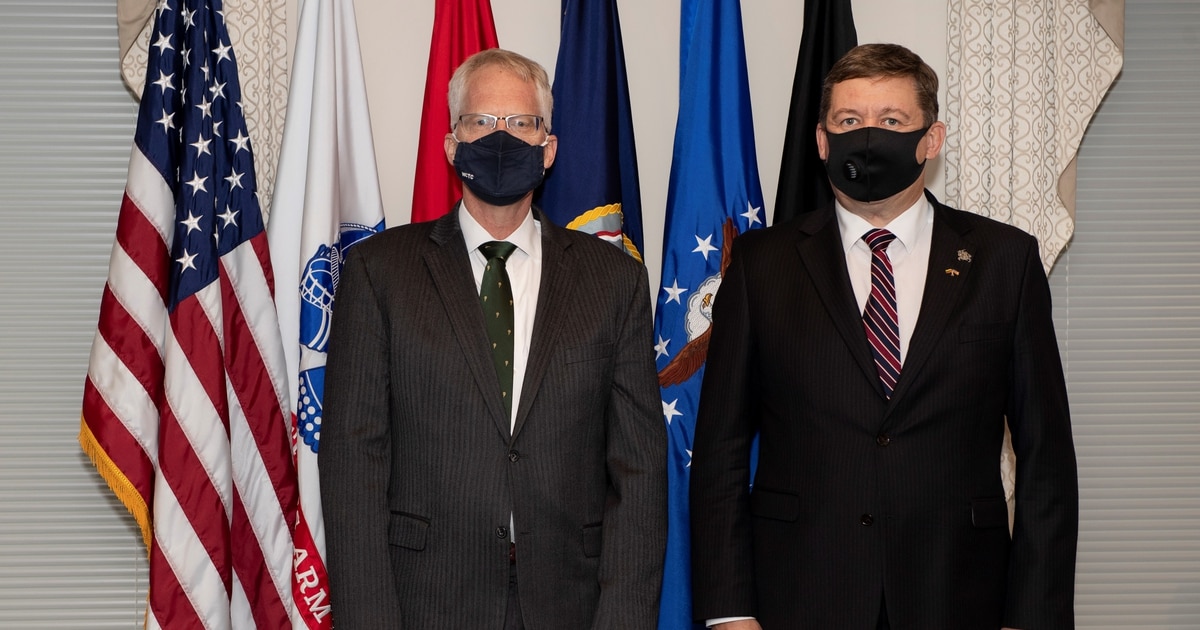 WASHINGTON — A top Pentagon civilian has tested positive for COVID-19 after meeting with a foreign dignitary — who may have also exposed Acting Secretary of Defense Christopher Miller, as well as the top civilians from the Air Force, Navy and Army, Defense News has learned.

Lithuanian Minister of Defense Raimundas Karoblis met with Miller, the service secretaries and retired Brig. Gen. Anthony Tata, who is performing the duties of the undersecretary for policy, during a Nov. 13 visit to the Pentagon. Upon returning to Vilnius this week, he tested positive for COVID.

Miller, as well as Air Force Secretary Barbara Barrett, Army Secretary Ryan McCarthy and Navy Secretary Kenneth Braithwaite, who met with Karbolis Nov. 16, have all tested negative and do not plan to self isolate.

The disease, which has claimed the lives of over 250,000 Americans, has an incubation period of up to 14 days, according to the Centers for Disease Control and Prevention. It is unclear when or where Karoblis contracted the disease and whether he was contagious during his visit to the Pentagon.

Photos from the meetings between Karoblis and the Pentagon leaders show those in attendance wearing face masks, although one formal photo shows Miller and Karoblis standing without face coverings.

“We have and are continuing to conduct further contact tracing of DoD personnel who have had close contact with the Lithuanian delegation or Mr. Tata, and are taking appropriate precautions in accordance with CDC guidelines,” Hoffman said. “Additionally, DoD personnel who had contact with the delegation have received or are receiving at this time rapid COVID tests as deemed necessary based on CDC protocols. Additional necessary testing for individuals who had contact with Mr. Tata is ongoing.”

“We will report additional positive cases as appropriate,” Hoffman added.

On Friday, A/SD Miller hosted Raimundas Karoblis the Defense Minister of Lithuania at the Pentagon for his first official bilateral meeting with a foreign leader. pic.twitter.com/dmT71QGVC6

COVID tests are more accurate the further from the potential infection, which is now six days ago. However, individuals infected with COVID can still spread the virus at any point during the 14 day infection period, per CDC guidelines. It is also possible that others in their circle were exposed during Karbolis’ visit or in the days after, when he traveled to Pennsylvania to meet with adjutant general Maj. Gen. Anthony Carrelli; in one photo posted on Twitter, Karbolis is seen without a mask.

The Pentagon leaders have made several public appearances since the meeting with Karoblis. On Tuesday, Miller made his first public comments since taking the helm by appearing in the briefing room to announce troop drawdowns in Iraq and Afghanistan; he then spent Wednesday traveling to Fort Bragg in North Carolina, where he met with members of the military, as well as the USS Gerald R. Ford carrier.

The same day that Barrett met with Karoblis, she attended the retirement ceremony for Gen. Stephen Wilson, the outgoing Air Force vice chief of staff, along with several service leaders. On Nov. 18, McCarthy was present at the Tomb of Unknown Soldier’s 100th anniversary, pictured both with and without a mask.

This is not the first COVID scare to hit top Pentagon leadership. On Oct. 6, almost the entirety of the Joint Chiefs of Staff chose to self isolate after the vice commandant of the Coast Guard tested positive for the disease. On Oct. 19, the officers were given the all-clear to return in-person work.

Sources: tech jobs site Hired, which was once valued at $500M, is considering winding down its operations after its unsuccessful efforts of selling itself (Zo&euml; Bernard/The Information)

Analysis: How a ‘vast ocean of goodwill’ between China and Australia turned sour