A Lockdown With Loopholes: New Virus Restrictions Come Into Force in England 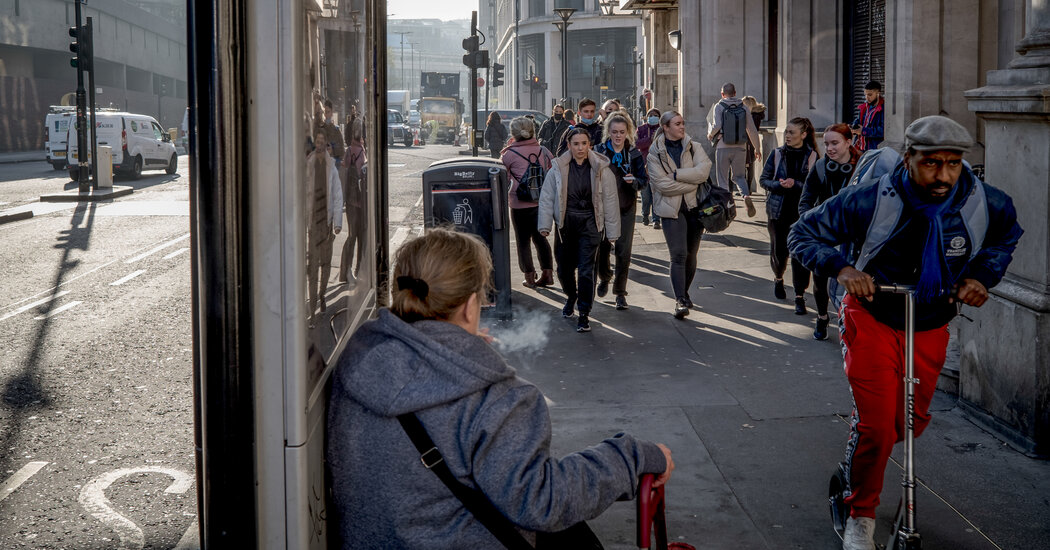 LONDON — Chocolate shops and stationery stores were busy as usual. Universities held in-person lectures. And workers crowded into some offices and factories, often with nothing more than a bottle of communal hand sanitizer to protect them from the rampant spread of the coronavirus.

In England on Thursday, the first hours of Lockdown 2.0, as local newspapers called it, looked very little like a lockdown at all.

The situation exposed the enormous difficulties of European governments, struck by a second wave of the coronavirus, as they try to put the genie back in the bottle after months of encouraging people to flock back to offices and pubs.

Since the spring, when lawmakers with little dissent ordered people to stay home, the political consensus around lockdown measures has collapsed. As a result, England’s new shutdown rules were shot through with loopholes, and companies openly flouted what relatively lenient restrictions were in place. At the same time, citizens and scientists alike fretted about the virus spreading unchecked for much of the winter.

“It feels very much like a lockdown in name only,” said Steve Gremo, a software developer in Kent, in southeast England. “In March, it seemed like the country came to a complete halt. It was not the same vibe this morning at all.”

The latest shutdown — under which pubs, restaurants and other nonessential shops were supposed to close, but schools, universities and many workplaces were left open — is slated to end on Dec. 2. But many scientists doubt that four weeks of spotty restrictions will be enough to stamp out the virus, or that the government will have done enough by then to revamp its contact tracing system to allow officials to keep track of the virus’s spread for the rest of the winter.

Prime Minister Boris Johnson’s government appeared to suggest on Thursday that some restrictions on working and socializing would remain in place for much longer than it had previously acknowledged.

In announcing the new lockdown measures this weekend, Mr. Johnson said the government would extend its worker support program — under which it pays 80 percent of furloughed workers’ wages — only until the restrictions lapsed on Dec. 2.

The government changed its tune on Thursday, with Rishi Sunak, the chancellor, announcing that the program would continue until the end of March because the economic damage of the pandemic would last beyond the second lockdown.

The opposition Labour Party attacked the government’s hesitation in offering the support, saying it had caused deep uncertainty for businesses and unnecessary layoffs.

For Mr. Johnson, imposing a second lockdown at all was a dramatic turnaround. Only 10 days before he announced the plan on Saturday night, he had described a national lockdown as “the height of absurdity.”

He has continued to face political pressure from libertarian and pro-business lawmakers in his Conservative Party, more than 30 of whom voted against the new restrictions in Parliament on Wednesday. The measures passed with help from Labour lawmakers.

Despite skepticism from scientists, Mr. Johnson insisted on Thursday that the new restrictions would work.

“This is not a repeat of the spring,” he said. “Four weeks is enough for these measures to make a real impact.”

But the busy subways, motorways, shops and workplaces that were in evidence across England on Thursday made plain that companies were reluctant to take the same precautions they did during the first lockdown. A large stationary chain, saying its services were essential, stayed open, raising some eyebrows.

At a chocolate shop north of London, Ashli Long, a supervisor, said schoolchildren and other customers had crowded into the store as usual. A local council official visited on Thursday and said the shop was considered nonessential and therefore needed to close.

But the shop’s owners were planning to resist, Ms. Long said, and open again on Friday. She said she worried about picking up the virus at the shop and bringing it home to her mother, who is being treated for breast cancer.

“We just feel like we don’t have any option right now,” she said. “If the government had set out rules that people could follow from the beginning, then we wouldn’t be in the situation we’re in now.”

Given the crowded streets on Thursday, she added, “I don’t see the virus going away anytime soon.”

The localized restrictions that Mr. Johnson’s government had previously imposed have shown signs of flattening the uptick in infections, scientists said, with reported daily new cases leveling off at around 23,000 in recent days. Still, deaths continued to rise, with nearly 500 recorded across Britain on Wednesday, the highest level since mid-May.

When the coronavirus first surged in the spring, scientists said, the government’s objectives in asking people to stay home were clear: Officials needed time to build up testing and contact tracing programs, learn how to treat the virus and buy enough protective equipment to keep doctors and nurses safe.

But Mr. Johnson’s goals for a second lockdown were narrower, with officials pointing to mass overcrowding in hospitals as inevitable if they did not impose new restrictions.

“I’ve no doubt the lockdown will push cases further downward, but the issue is what is going to happen afterward,” said Paul Hunter, a professor of medicine at the University of East Anglia. Referring to the low infection rates over the summer, he said, “It’s not going to go back to what it was like in August.”

Prof. Hunter said a return to more localized restrictions was likely, though he said lags in imposing them so far this autumn had limited their use. Scientists have urged the government to fix problems with its contact tracing system, known as Test and Trace, which is now overwhelmed with cases.

Whereas Britons voluntarily stopped socializing before the first lockdown in March, they appeared to pick up the pace before the second, with online restaurant reservations rising this week compared with the same period last year.

Roadways and airports were busy on Wednesday night as some people hurried to second homes or to go on holiday before the restrictions took effect. Some pubs offered deeply discounted beers to drain their stock before lockdown.

Many people worried about repeated cycles of lockdowns and reopenings throughout the winter. Only a few months ago, the government had subsidized restaurant meals and begun a campaign encouraging people to return to their offices.

“The government is constantly saying to us, ‘Yes, go back to work, contribute to society, we need to get the economy going,’ and then, ‘Oh no, wait, too much, quick lock down everything again,’” said Mr. Gremo, the software developer. “They’re trying to walk a fine line but instead they’re swinging between either extreme.”

Andy Lewis, who also lives in Kent, said the streets were far busier than they would have been for school drop-offs, essential work and shopping alone.

“It feels like either guidance hasn’t been very clear, or people are just ignoring it,” he said. Referring to a popular coffee shop chain, he added, “This morning I got an email from Costa telling me they are still open for takeaway, yet the government are telling us not to leave the house unless it’s essential?”