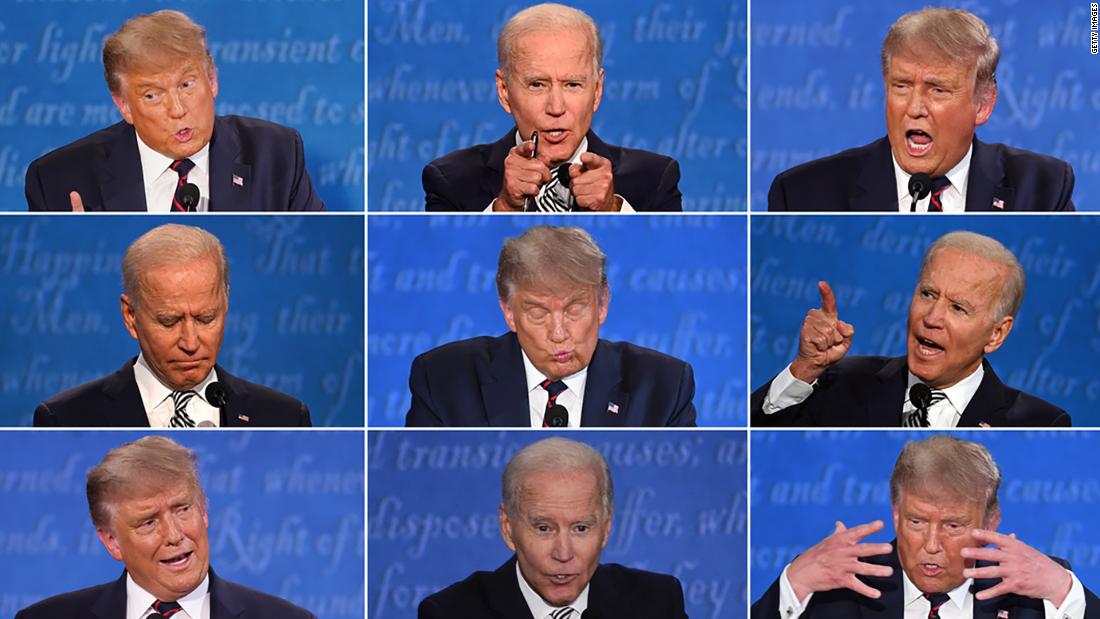 Trump bullied, bulldozed and obfuscated his way through the 90-minute showdown, interrupting Biden and moderator Chris Wallace of Fox News at every turn. He ignored substantive questions and Biden’s policy arguments, and instead swung at a straw-man version of Biden, taking aim at both Biden’s son and a distorted description of his record that exists primarily in far-right media.

Over and over, Wallace tried to regain control of the debate, without success.

When Trump complained that only he was being chastised for talking over questions and Biden’s answers, Wallace shot back: “Frankly, you have been doing more interrupting.”

Trump, who has trailed Biden in national and swing-state polls, made little effort to reach out to voters who do not currently support him. He could have further damaged his standing by refusing to condemn White supremacists after being asked to do so multiple times.

Here are six takeaways from the first of three presidential debates:

“This is a President who has used everything as a dog whistle to try to generate racist hatred, racist division,” the former vice president said.

During a portion of the debate that focused on race relations, protests, violence and policing, Trump tried to latch Biden to the violent and destructive elements of this summer’s protests over the police killings of George Floyd in Minnesota, Breonna Taylor in Kentucky and others, even as Biden condemned violence. Trump also claimed that America’s suburbs — which have tilted in Democrats’ favor during his tenure — would be “gone” if Biden is elected.

“He wouldn’t know a suburb unless he took a wrong turn,” Biden shot back, adding that “this is not 1950” and Trump’s dog whistles “don’t work anymore.” He said Trump’s handling of the pandemic and the climate have damaged the suburbs.

The section ended with Trump flatly refusing to condemn White supremacy when asked to do so by Wallace and Biden. “Stand back and stand by,” he said to the white supremacist militia group Proud Boys, in a moment reminiscent of his response to White supremacists’ march in Charlottesville, Virginia, in 2017.

Amid unleashing a barrage of misinformation and falsehoods about mail-in voting, Trump failed to affirm the one thing he was asked about it: whether he would encourage his supporters to be peaceful if election results are unclear.

“I’m encouraging my supporters to go into the polls and watch very carefully,” Trump said when asked what he would tell his followers in a post-November 3 world.

After issuing his usual falsehoods about widespread fraudulent voting — albeit in front of a newly massive audience and without an ounce of fact-checking from the moderator — Trump declared he wouldn’t support a result under certain circumstances.

“If I see tens of thousands of ballots being manipulated, I can’t go along with that,” Trump said.

It was an answer that will do little to calm fears of post-election chaos.

For his part, Biden insisted that if Americans vote in large numbers — presumably for him — a contested election could be prevented.

If Trump has an overriding strategy in the final days of the campaign, it is to divert attention from the coronavirus pandemic, which voters say in polls that he has badly mismanaged. It has been evident for months Trump is eager to move on.

And if his goal Tuesday was to obscure his coronavirus record, Trump may have been successful. Despite Biden’s attempts to inject it back into the discussion periodically, the debate devolved into arguments and bickering that ultimately did not center on the global pandemic, which has now killed 1 million people.

Trump openly said the vaccine process is political, mocked Biden for wearing a mask and instead of a robust defense of his record he sought to claim a hypothetical President Biden would have done worse.

The scaled-down audience and lack of a handshake also brought the health crisis into the debate hall atmospherics. And Biden made multiple references to the 200,000 Americans who have died.

But ultimately the debate was not about the pandemic. It was about Trump’s belligerence, which in his view can only be considered a positive.

But while the debate opened with questions about the high court, the details were largely lost amid the chaos, as Trump interrupted Biden’s answers and Wallace struggled to rein in a debate that was devolving into disarray from its opening moments.

Biden attempted to turn the discussion into one over health care, pointing to the potential for a Supreme Court with a 6-3 conservative majority to overturn the Affordable Care Act, including its protections for those with preexisting conditions, and undo Roe v. Wade, the 1973 court decision that legalized abortion nationally.

Trump tried to pin Biden down on progressive proposals to end the Senate’s filibuster and expand the Supreme Court. “Why wouldn’t you answer that question?” Trump said.

None of those substantive differences really broke through, though, as Trump repeatedly interrupted Biden and the moderator and the two candidates talked over each other.

Biden largely responded to Trump’s obfuscations and interruptions with eye rolls, head shakes, chuckles and “C’mon, man” comments. He never lost his temper — but he made glaringly clear how little he thinks of Trump.

The first example came about 18 minutes into the debate, when Biden responded to a series of Trump interruptions by saying: “Will you shut up, man?”

“You’re the worst president America has ever had. Come on,” Biden said later, as the two debated taxes and the economy.

“It’s hard to get any word in with this clown,” he said later.

And at the end of a portion focused on race, Biden bluntly said, “He’s the racist.”

It took about 45 minutes for Trump to raise an issue his advisers said he was itching to bring up: Hunter Biden.

Trump and his allies have repeatedly made unfounded and false claims to allege that the former vice president and his son acted corruptly in Ukraine.

It’s an issue Republicans believed at one point would dominate this year’s campaign, though it has failed to catch hold amid a global pandemic, urban violence and an economic downturn.

Still, some Democrats had wondered how Biden would respond when the topic arose. Some feared he would lose his cool, sensitive to matters of family.

Instead, Biden seem prepared and spoke straight to the camera as he sought to rebut Trump’s claims that his son engaged in wrongdoing when he served on the board of a Ukrainian energy company.

“This is not about my family or his family, this is about your family — the American people,” Biden said. “He doesn’t want to talk about what you need.”

Undeterred, Trump kept returning to the issue. As Biden sought to criticize the President for reportedly calling US war dead “losers,” he brought up his late son, Beau — who served in Iraq before succumbing to brain cancer in 2015.

Instead of rebutting the claims about his views of the military, Trump sought to return the debate to Hunter Biden. “I don’t know Beau Biden,” Trump scoffed.

As Trump launched into an attack on Hunter Biden, including raising his past issues with drug addiction, Biden again turned to the camera and addressed the issue, even as Trump was seeking to interrupt.

“My son had a drug problem, but he’s overcome it and I’m proud of him,” Biden said.

The personal moment was powerful, and could forge a link between Biden and millions of Americans whose families have faced drug and alcohol addiction.

Find out which countries are welcoming US tourists now

Palestinian prisoners escape from Israeli prison, apparently through a tunnel